Glasgow, the third largest city in Britain, is a vibrant exciting destination full of world class museums and galleries, spectacular Victorian architecture, historical places of interest and is internationally renowned for its sense of style, culture and lively music scene.

For those visiting on a limited budget the are plenty of opportunities to experience the many delightful attractions that abound in the city and get a real taste of the friendliness of the Glaswegian locals. Follow our money saving tips for making the most of your visit of this great cultural city.

Here is how to travel through Glasgow, Scotland on a budget.

How To Get There On A Budget

By Air
The main airport is Glasgow International Airport (GLA). Budget carriers such as Ryanair and easyJet has flights to the airport. If you’re flying from within Europe, you could also catch a Ryanair flight to Prestwick airport, and then take a cheap bus ride to Glasgow.

Train
The train is the most convenient option if you’re travelling within the UK. If you plan on travelling by train a lot, then consider getting a BritRail pass. Otherwise, book your ticket in advance to get the best prices. Ticket prices are only 13.50 GBP from Edinburgh.

Bus
Getting there by bus is the most economical mode of transport, although it does take the longest. Bus companies National Express and Megabus has routes to the city that begin their journey from London. The ticket prices for these journeys only cost 13 GBP for the whole trip (London to Glasgow) but be sure to book well in advance, or tickets may be already sold out. 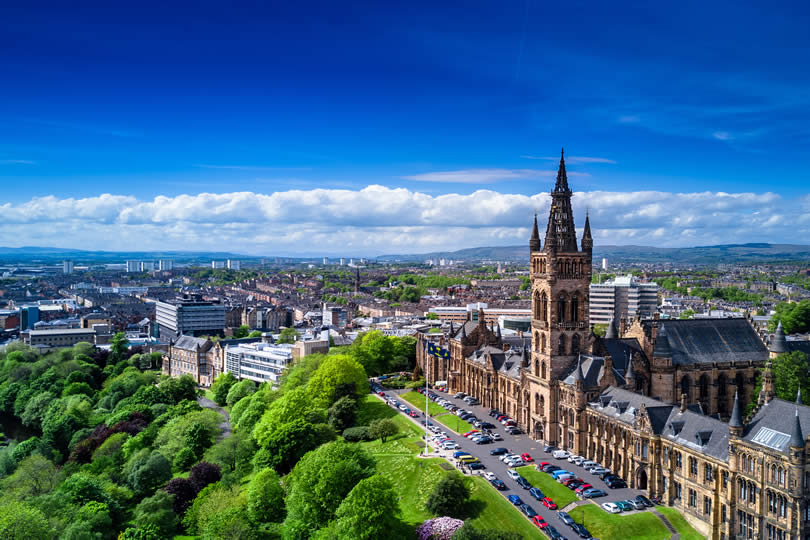 Getting Around on A Budget

By Walking
If you’re in the West End or the City Centre, it’s easy to get around by walking since the city is so compact. The city council even has a “Glasgow walking app” available that will point out hidden gems as you explore the city by foot.

By Subway
The subway is also another easy way to get around the West End or City centre. It runs every 5 minutes and takes a circular route around the city. Tickets start from just 1.40 GBP.

Train
If you want to visit places further out of the city centre, the Glasgow central station links you to over 110 stations in the Greater Glasgow area. It’s a good idea to purchase the SPT “roundabout” ticket because allows you to travel to all 110 stations.

By Bus
The local bus network is run by First Bus Glasgow and has over routes all over the city. There is also a city sightseeing bus that takes you to all of the top tourist destinations in Glasgow. Just hop on and hop off as you like.

What do see and do

Glasgow is a growing city in the Scottish countryside, with a university and burgeoning tech and art scene. For the budget traveller, the city has many things to offer. Between walking trails, parks, free museums, outdoor tours and the lively social life in the city, there are so many activities you can do that cost virtually nothing.

Fabulous Free Art Galleries and Museums
Public museums in Glasgow have free entrance and you could easily spend most of your day wandering through them admiring the art from Scottish artists. The Kelvingrove Art Gallery and Museum, as well as the Gallery of Modern art, are two free museums we recommend. 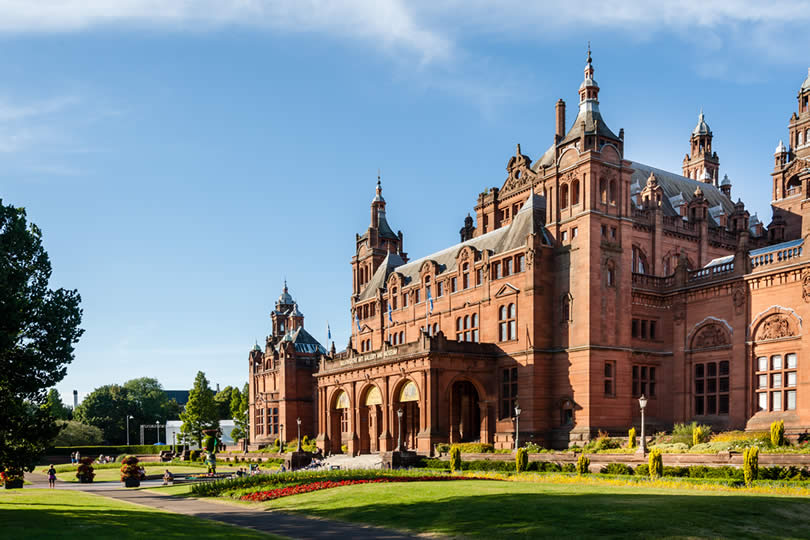 Glasgow has an incredible selection of internationally important galleries and award winning museums. Most are free of charge to enter and simply not to be missed. Kelvingrove Art Gallery and Museum is an architectural masterpiece in itself and home to one of Europe’s best art collections.

It continues to be one of the most visited museums in the Britain with an astounding 8,000 objects and artefacts from archaeology and armour to paintings and sculpture from across the eras. It is possible to pass several hours walking around the 22 galleries marvelling at the Renoirs, Rembrandts and Salvador Dalis on display.

With over twenty galleries and museums visitors to Glasgow are spoilt for choice. The Gallery of Modern Art, located in an imposing neo-classical townhouse in the centre of the city, has an inspiring programme of temporary exhibitions and a variety of workshops. It is well worth walking down to Glasgow Green to visit the People’s Palace where you can trace the development of Glasgow’s development from the 18th to the late 20th century. One exhibit to note is the comedian Billy Connolly’s famous ‘Banana Boots’. Afterwards pop into the Winter Gardens to see the tropical plants in the large Victorian glasshouse and have some refreshments in the café.

Other venues include The Hunterian with its archaeological and ethnographical collections, the modern design Riverside Museum packed with fascinating transport memorabilia and the medieval Provand’s Lordship which is one of the oldest properties in Glasgow. Built in 1471 the house was extensively restored to recreate life in medieval times.

Take time to discover Glasgow’s stunning architecture
Glasgow is a great city for exploring on foot. Enjoy a self guided tour to admire the city’s distinctive architecture, Glasgow is one of the most eclectic architectural destinations in Europe. It is particularly noted for its Italianate palazzo frontages, classical Roman and Greek motifs, Art Nouveau design as well as Moorish Revival and Spanish Renaissance styles.

The city is renowned for its Arts and Crafts movement led by the highly original designs of architect Charles Rennie Mackintosh (1868–1928). Examples of Mackintosh’s work can be found all over the city, including the Glasgow School of Art, Scotland Street School and Willow Tearooms.

There are highly recommended former student-led tours at the Glasgow School of Art that take in the School’s extraordinary library, and many of his other wonderful buildings in the city if you are take the longer tour. Pop into The Lighthouse Centre for Design and Architecture, just off the Style Mile, to see the Macintosh collection and other vibrant exhibitions. All absolutely free of charge.

See The University of Glasgow
Apart from the beautiful architecture and landscape of the University, the area also has many shops, parks and restaurants nearby. 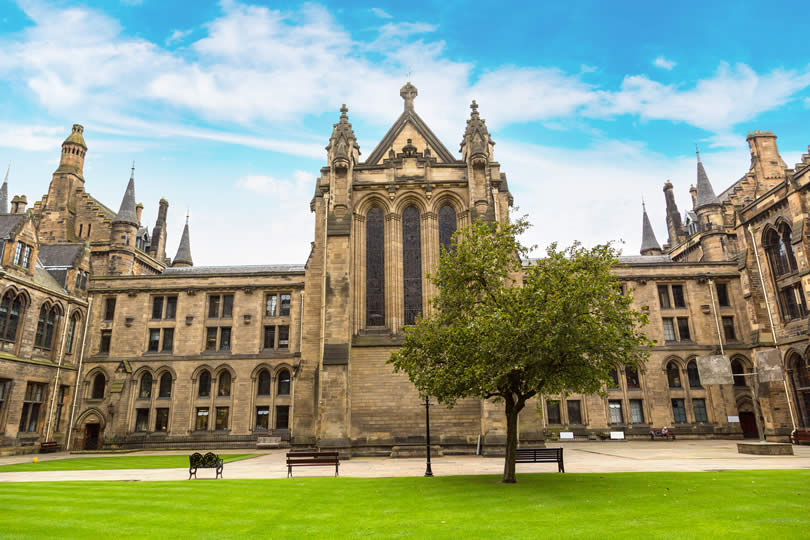 While away the hours in Glasgow’s Green Spaces
The city boasts more than 90 parks and gardens, many of which are award winning and offer great places to relax, walk, cycle and have fun with family and friends. Cuningar Loop is one of the newest additions, 15 hectares of derelict land transformed into a lovely woodland park with Scotland’s first outdoor bouldering park plus a bike skills area and adventure play area.

Kelvingrove Park is a delightful green space that includes the River Kelvin walkway and the beautifully refurbished Kelvingrove Bandstand that hosts open-air arts events. Victoria Park has extensive floral displays, Tollcross Park is a must stop for kids with its farmyard animals or venture further out to peaceful Pollock Country Park to see Highland Cattle and explore their Woodland Trails.

Spend Time At Linn Park
Linn Park is a picturesque park with beautiful scenery and many paths to walk along. Great for picnics and scenic photos.

Grab a bargain in the city’s shopping centre and malls
Style Mile, the area between Argyle Street, Buchanan Street and the Merchant City has an extraordinary concentration of top notch high street stores, exclusive designer emporiums, independent boutiques and one-off speciality shops. It is a shopaholic’s paradise, where sales and bargains can be found all year round. Buchanan Street is traffic-free and the buzzing commercial centre of the city, while Merchant City is Glasgow’s new cultural quarter where trendy bars, great cafes and restaurants and quirky shopping outlets can be found.

A UNESCO City of Music

Glasgow is one of the top UNESCO-recognised destinations for music and has an amazing live music scene throughout the year. There are virtually 100s of ongoing music events in clubs and pubs such as the King Tut’s Wah Wah Hut, one of the city’s most established music venues.

One the annual highlights is the 2 week Celtic Connections festival that celebrates traditional and contemporary Celtic and world music with over 2,000 musicians taking part. In the summer there are some great festivals including the International Jazz Festival and the West End’s 3 week multi-cultural festival. Or experience the phenomenal sight and sound of the massed pipes and drums of over 230 bands competing at the annual World Pipe Band Championships.

The is an extensive and diverse choice of pubs and eateries in Glasgow where the budget traveller can enjoy good quality drinks and food at fairly cheap prices. Great foodie bargains can often be found in the strangest of places in the city, so keep an open mind.

Dumpling Monkey on Dumbarton Road is an Asian café well worth checking out, serving authentic noodle soup and Chinese dumplings at very reasonable prices. Nic’s NYC Deli on Byres Road makes delicious sandwiches with inspired fillings at inspired prices. And of course, try the Glaswegian speciality of fish and chips, there are plenty of chip shops about so just let your nose guide you to the nearest one!

Bread Meats Bread is famous for its burgers, poutine and bacon chips. With average prices between £4 and £10, it’s also very affordable. Hillhead bookclub is another affordable place with their menu stating “no dish more than a tenner”.

Although the price of accommodation is fairly high just like the rest of the UK, there are still some low-cost alternatives available. Couchsurfing not only lets you save money on accommodation while in Glasgow, it also gives you local insights into the area that you wouldn’t be able to get otherwise.

The hotel ibis in Glasgow is in a very convenient location in the city centre, near the Central Railway station and close to all the tourist destinations. It’s possible to get a cheap room here, but you must book well in advance.

The Alexander Thomson hotel is also in the city centre and has low cost rooms on offer.

Budget travel in the Scottish Highlands

Inverness Scotland: 10 Easy Ways to Save

5 Extraordinary Places to Visit in Scotland

Things to do in Pitlochry Scotland

Aberdeen 10 Ways to Enjoy on a budget