The Most Iconic Women in Aviation

This week marks Amelia Earhart Day, commemorating the birthday of one of the most renowned female pilots of all time.

Earhart experienced many accomplishments in her flying career, including being the first woman to fly solo across the Atlantic Ocean, and is to this day an inspiration to many women in the aviation industry.

Sadly, Earhart mysteriously disappeared in 1937 and was declared dead in absentia in 1939.

In celebration of Earhart’s birthday, and with National Aviation Day coming up in August, we wanted to commemorate Earhart and some of the other iconic women in aviation through history and up to the present day.

You can find out more about each of these inspirational women in our High Flying Females illustrative series below. 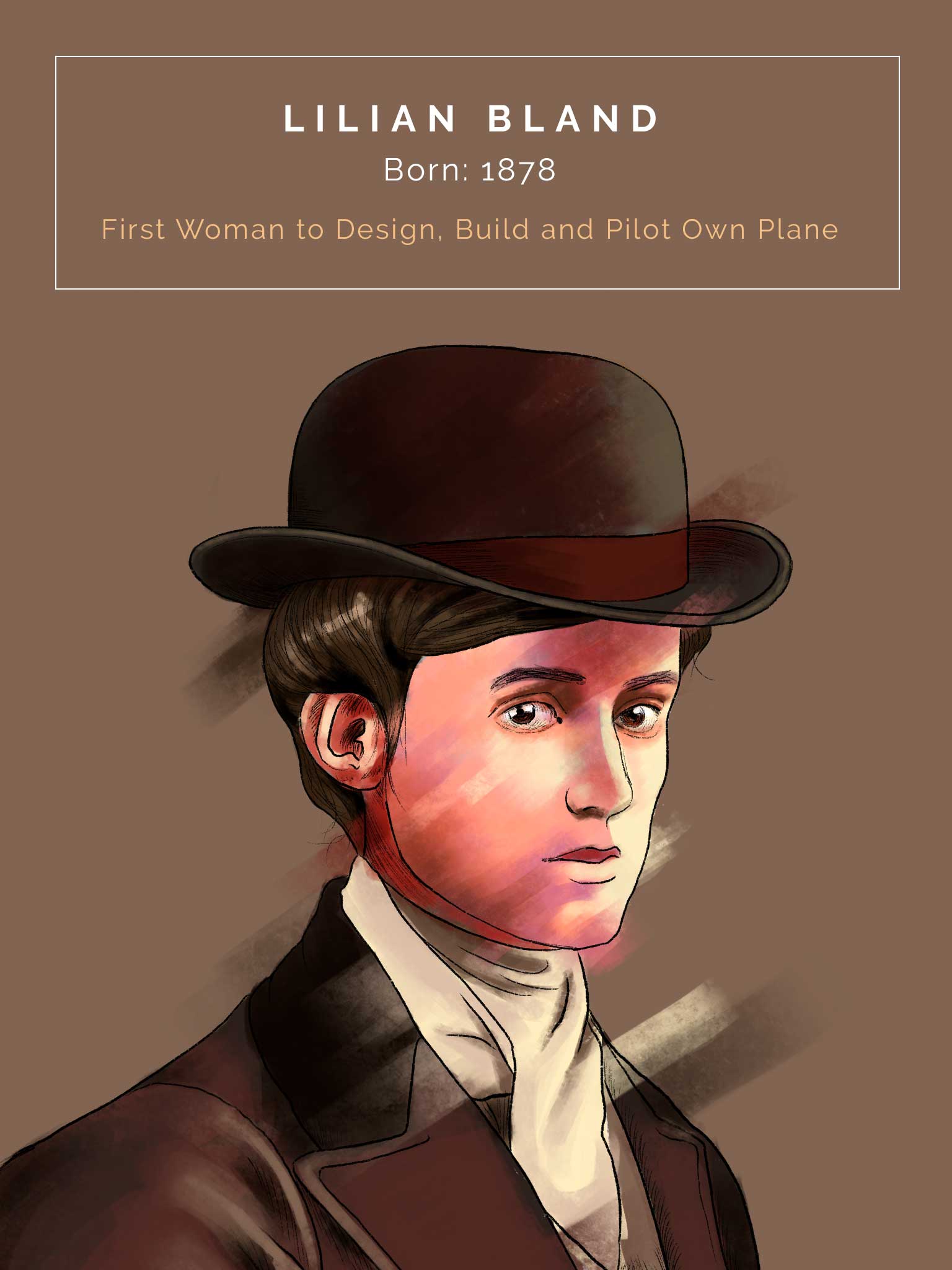 Lilian Bland was the first ever woman to design, build and pilot her own plane. Bland was in many ways an ‘unconventional’ woman of her time, partaking in habits such as wearing trousers and practising martial arts.

Bland was inspired to get into aviation following a postcard sent by her uncle of the Blériot monoplane. Bland’s first production was a flyable model biplane, from which she then progressed to build a full-scale glider. 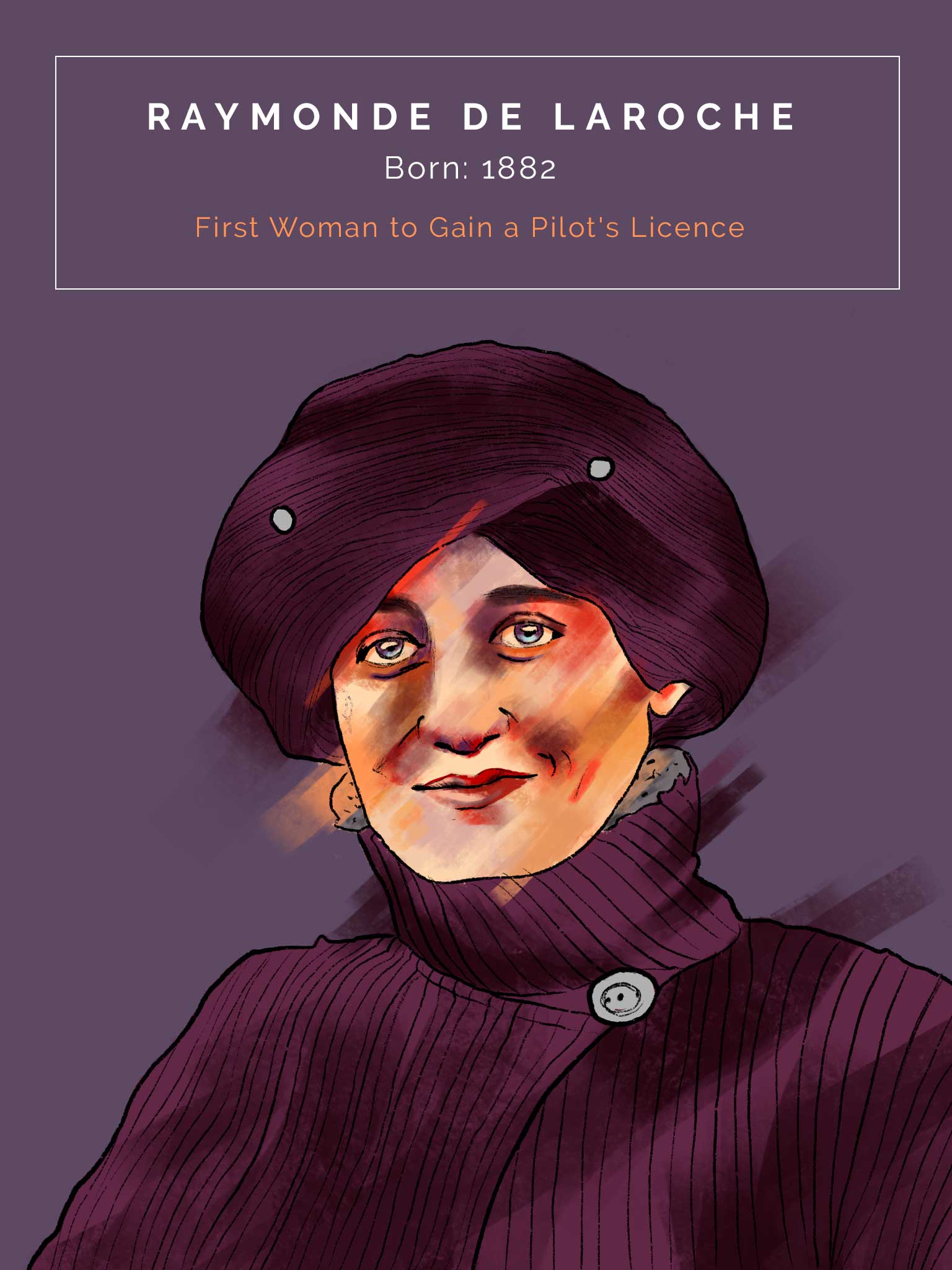 Raymonde De Laroche was the first ever woman to gain a pilot’s licence.  De Laroche started her career as an actress, but was inspired by Wilbur Wright’s 1908 demonstrations of powered flight in Paris and decided to take up flying herself.

In 1909 she turned to her friend Charles Voisin, an aviator and aeroplane builder, to provide her with flying lessons. In 1910 she became the first ever woman to receive a pilot licence, being awarded licence #36 of the Fédération Aéronautique Internationale by the Aero-Club of France. 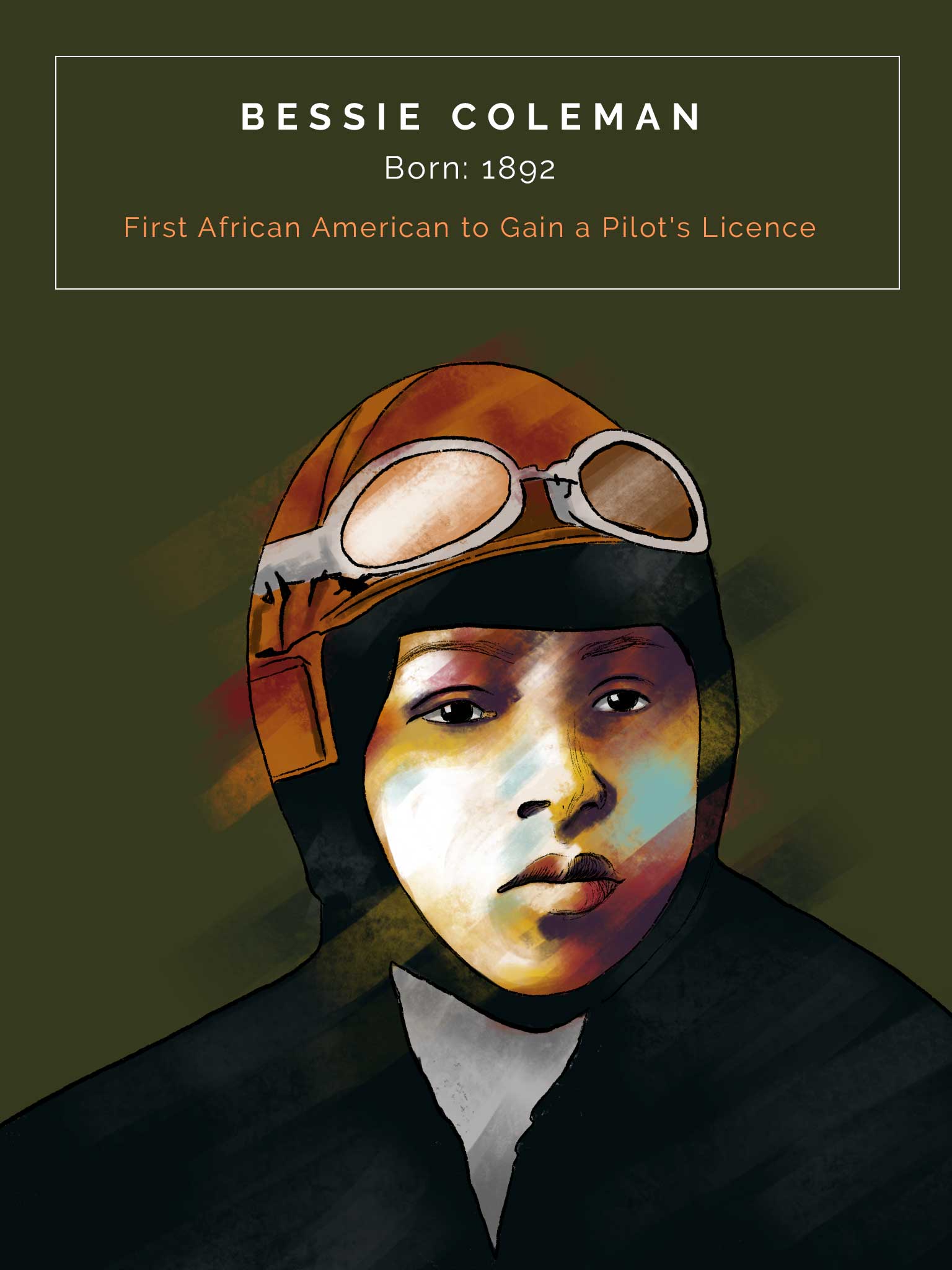 Bessie Coleman was the first ever African American to gain a pilot’s licence. Coleman developed an interest in flying at a young age, but there were no opportunities for African Americans in the US to attend flight school.

Undefeated, Coleman saved money and travelled to France where she studied to become a pilot. In 1921 she become the first person of African America descent to earn a pilot’s licence. She went on to become a successful air show pilot in the US and intended to set up the first school for African-American pilots, but sadly died in 1926. 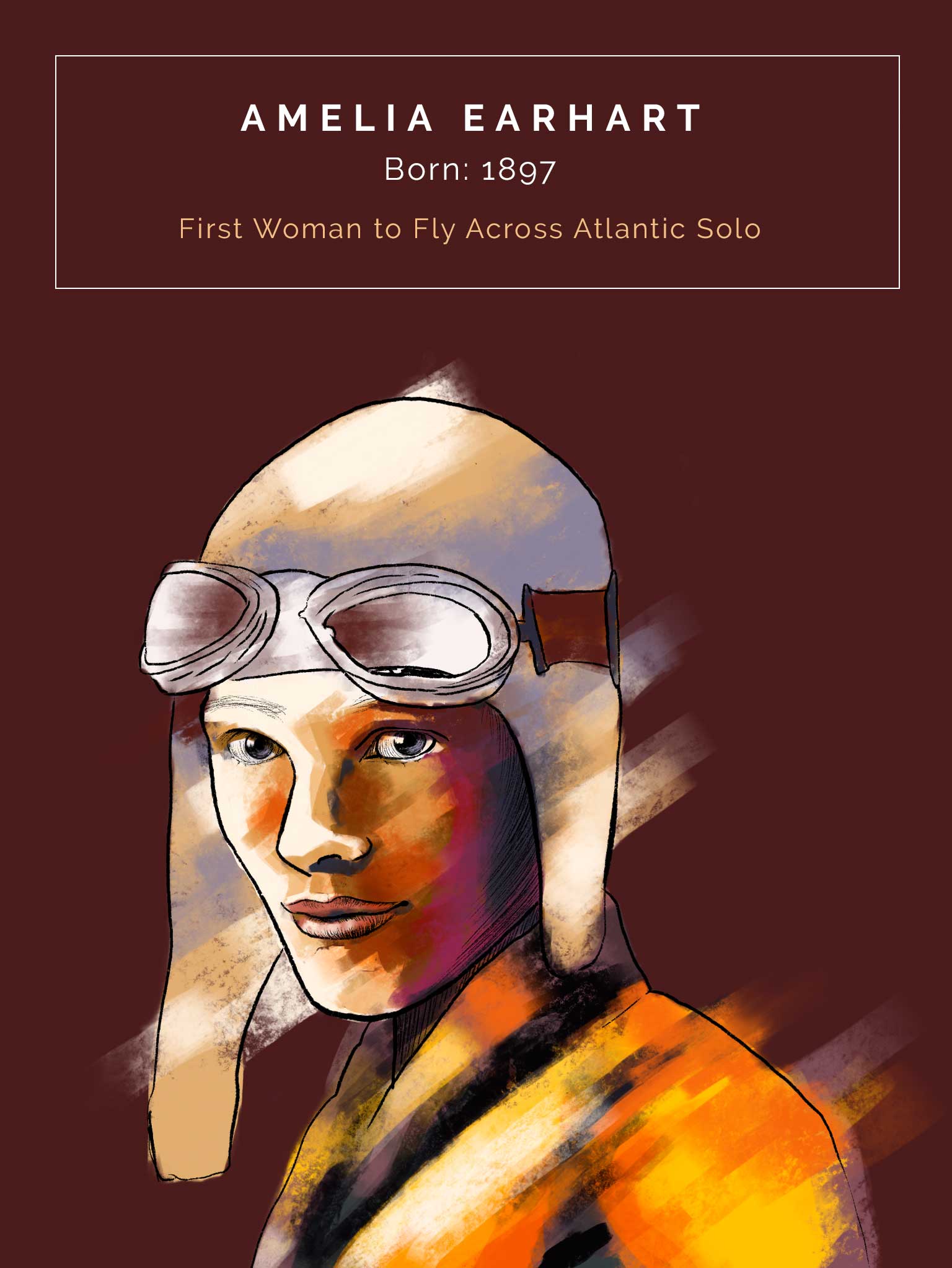 Amelia Earhart set many records in her flying experience, including being the first female aviator to fly solo across the Atlantic, for which she received the US Distinguished Flying Cross. She also wrote many best-selling books about her experiences as a pilot and played a key role in setting up the female pilots’ organisation The Ninety-Nines. Additionally, she was a member of the National Woman’s Party and a supporter of the Equal Rights Amendment.

Earhart’s disappearance is shrouded in mystery and remains a source of fascination to this day. She and navigator Fred Noonan disappeared over the central Pacific Ocean while attempting to circumnavigate the globe in 1937. 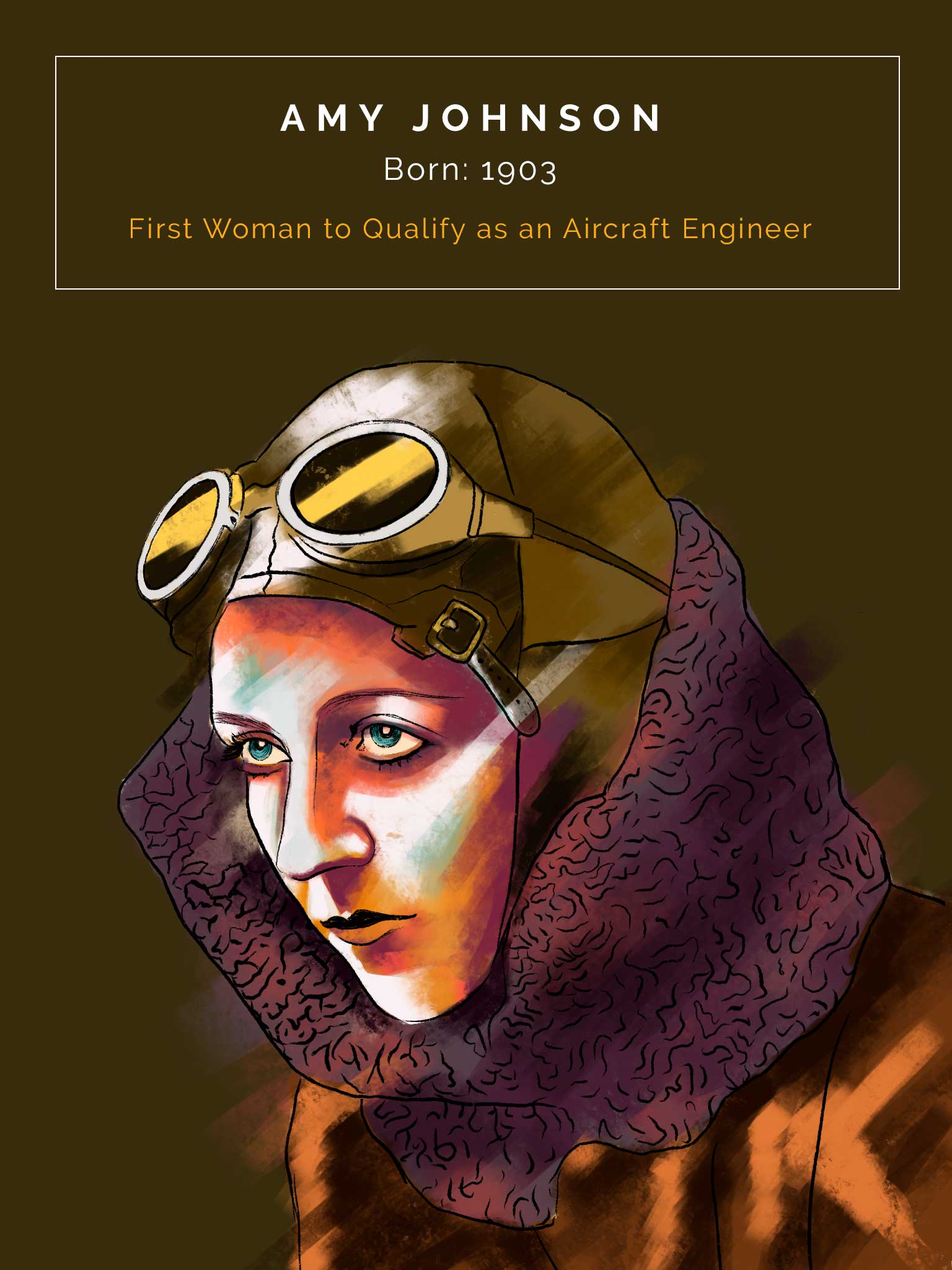 Amy Johnson was the first ever woman to qualify as an aircraft engineer, and she was also the first female to fly solo between Britain and Australia. Johnson set many long-distance records in her time and was also part of the Air Transport Auxiliary in WWII.

Johnson first began flying as a hobby but went on to gain an aviator’s certificate and pilot licence in 1929, under the tutelage of Valentine Baker. That same year she became the first woman to obtain a ground engineer’s licence. 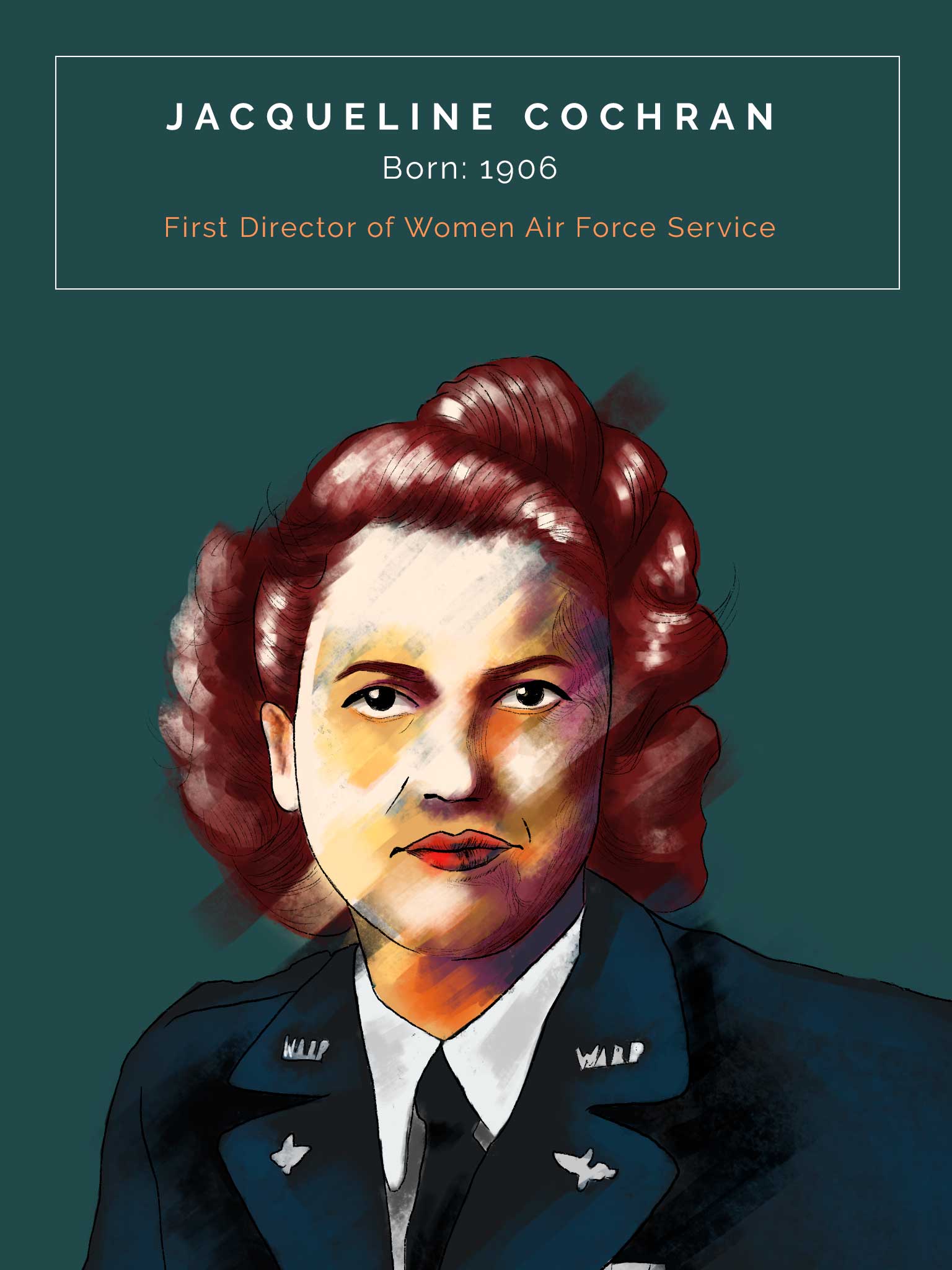 Jacqueline Cochran was one of the most prominent racing pilots of her generation, a pioneer in American aviation and a key player in the Women Air Force Service Pilots.

Cochran began taking flight lessons in the 1930s and was able to fly an aircraft within just 3 weeks. By 1938 Cochran was considered the best female pilot in the US. Cochran petitioned the government to start a women’s flying division on the Armed Air Forces, and she successfuly went on to be the first Director of the Women Air Force Service. 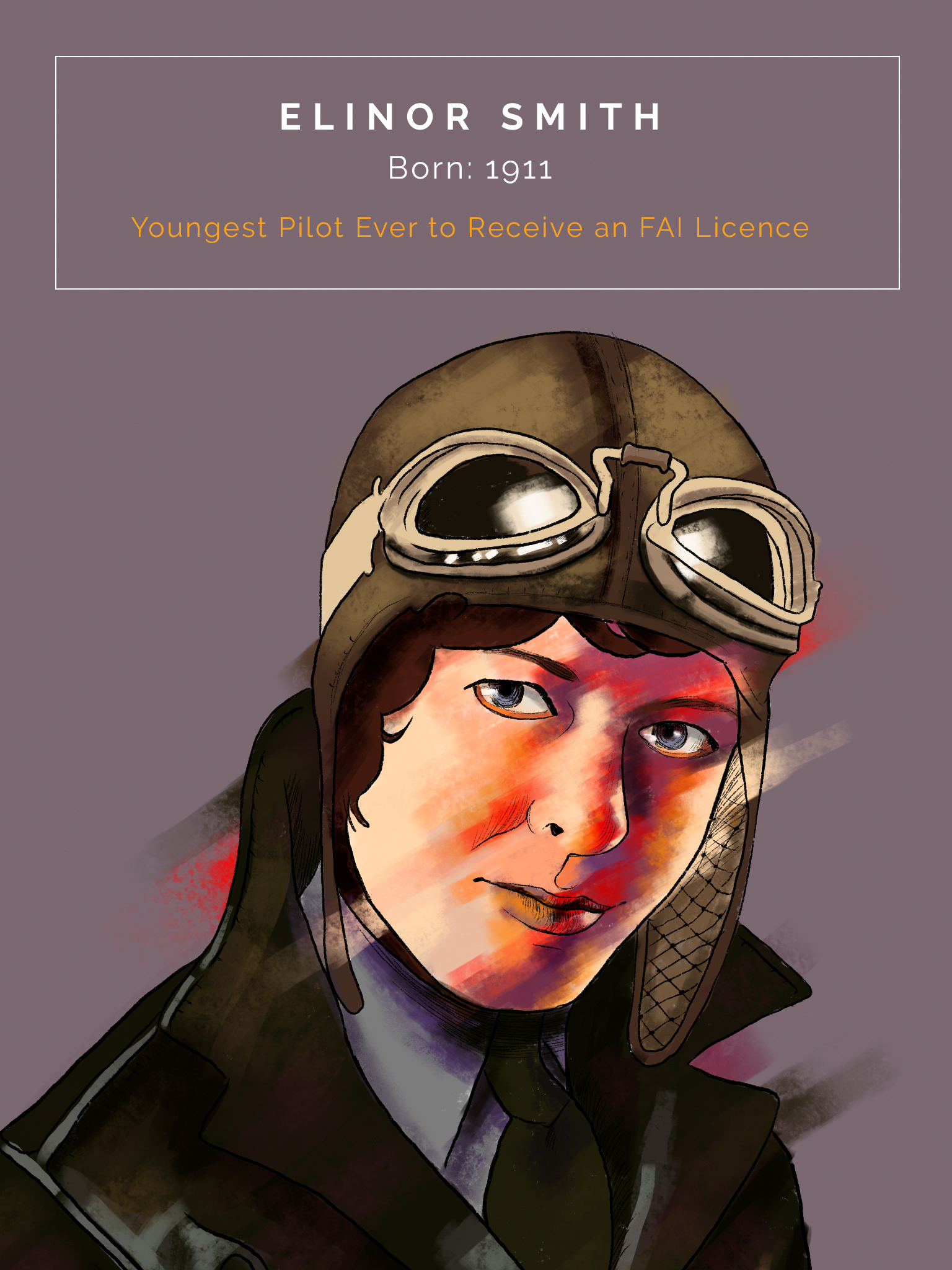 Elinor Smith was the youngest ever pilot to receive an FAI licence, being the youngest licenced pilot in the world at the age of 16. Smith was known as ‘the flying flapper of freeport’ and was the first woman test pilot for both Fairchild and Bellanca airlines.

Smith took her first ever plane ride aged just six, and fell in love with flying. At the age of 10 she began receiving flying lessons and soloed for the first time aged 16. Smith broke many other flying records including establishing the women’s flying endurance record and woman’s world speed record. 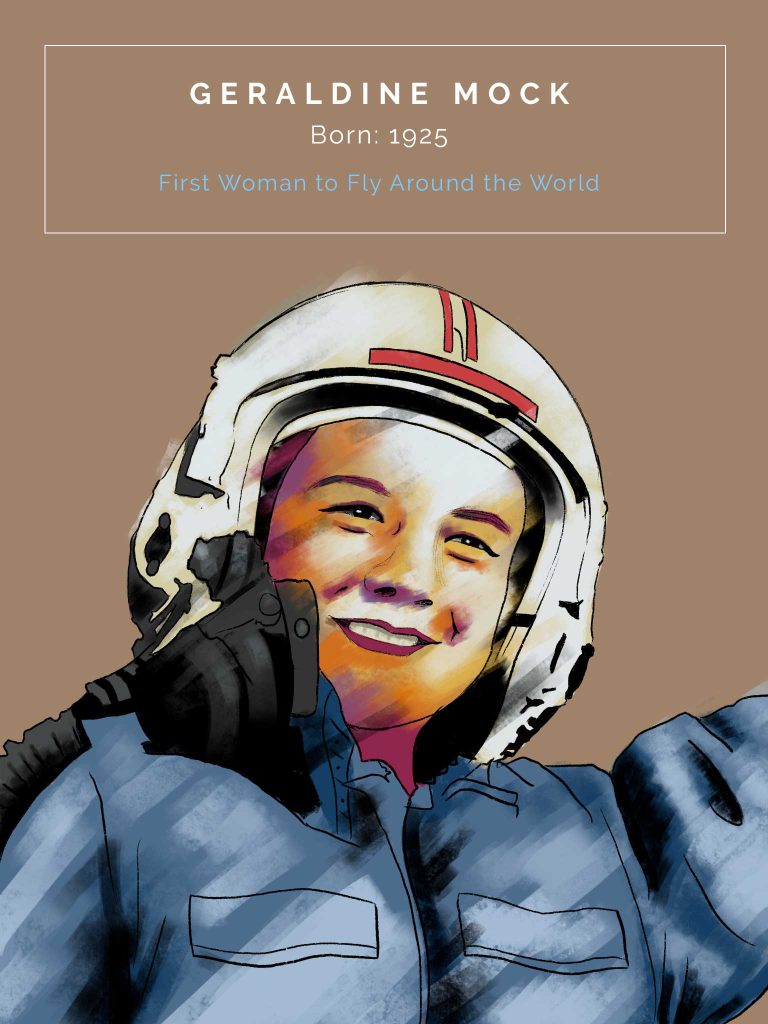 Geraldine Mock, also known as Jerrie Mock, was the first woman to fly around the world – a feat she achieved in 1964. Her trip lasted just under 1 month, travelling between March 19th and April 17th 1964. In 1970 Mock published a book documenting her around the world journey.

Mock displayed an interest in flying from a very young age, having the chance to fly in a cockpit with her father at the age of 7. Mock set many records in her flying career and was the first woman to achieve many other feats including flying from the Pacific West to East and flying both the Atlantic and the Pacific. She also achieved multiple awards and recognitions during her career. 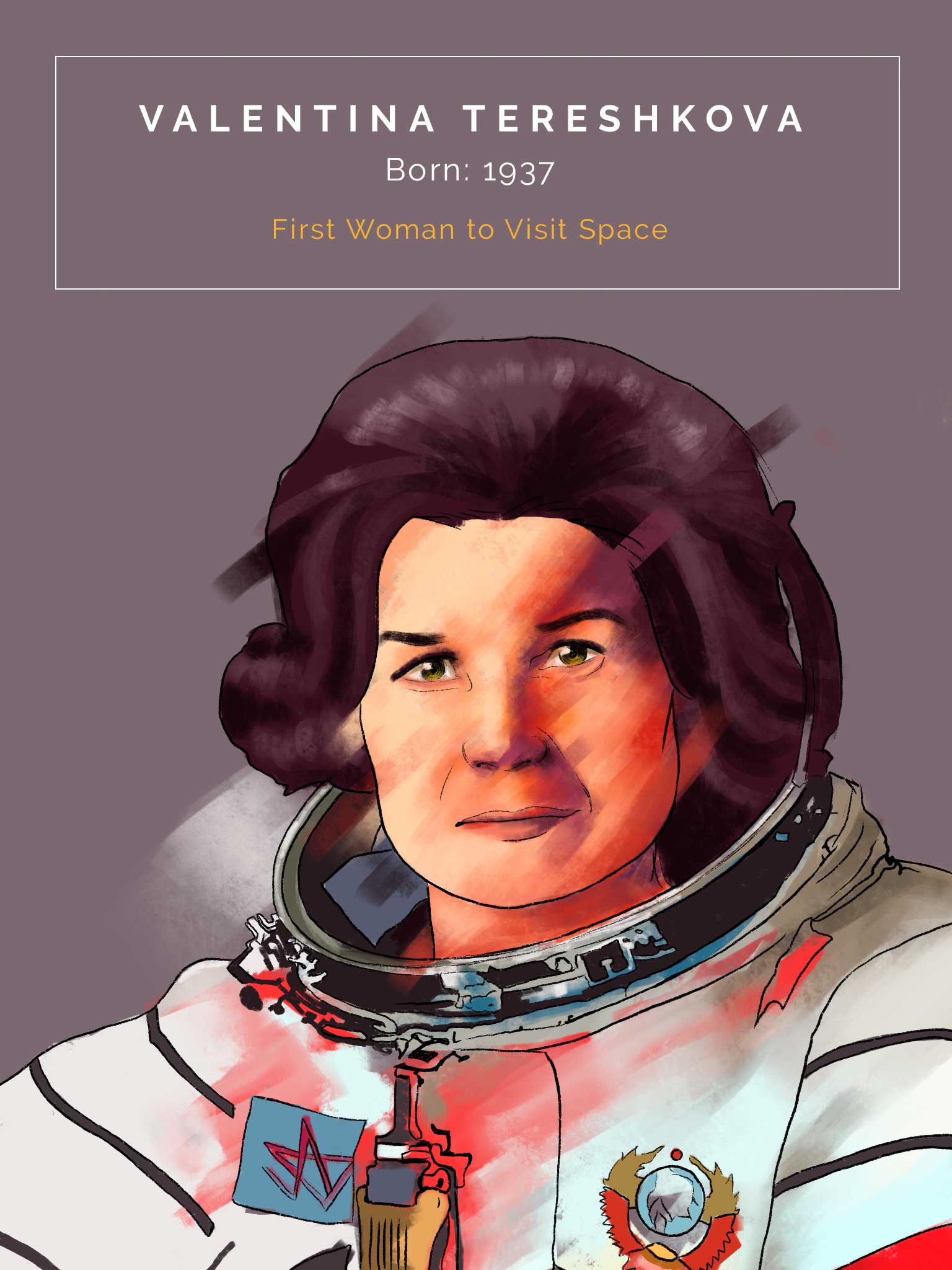 Valentina Tereshkova was the first woman to visit space. She was selected from more than 400 applicants to pilot the Vostok 6 ship in June 1963. She was also the first ever civilian to travel to space.

To this day Tereshkova remains the only woman to have ever been on a solo mission to space, and she has stated she would travel on a one-way trip to Mars if the opportunity arises. Prior to her space mission, Tereshkova first got involved in flying through an interest in parachuting and skydiving. After her flight, she achieved a degree in cosmonaut engineering and in 1977 she earned a doctorate in engineering. 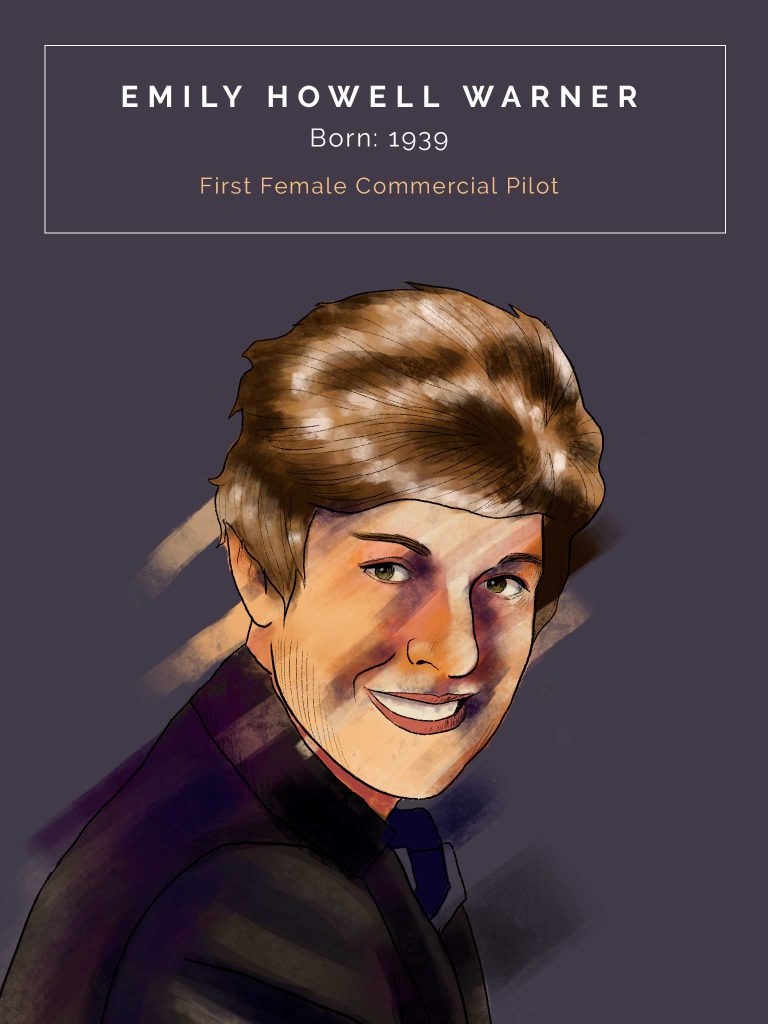 Emily Howell Warner was the first ever female commercial pilot, and she was also the first woman to become a US airline captain. Over her career she has flown over 21,000 flight hours.

Howell Warner first started her career in aviation as a flight attendant, but decided to progress on to piloting at the age of 17. She was encouraged to begin flying lessons after sitting in the cockpit of a flight and obtained her pilot licence within a year. She has achieved many awards and recognitions through her life and career, including being inducted into both the National Women’s Hall of Fame and the National Aviation Hall of Fame. 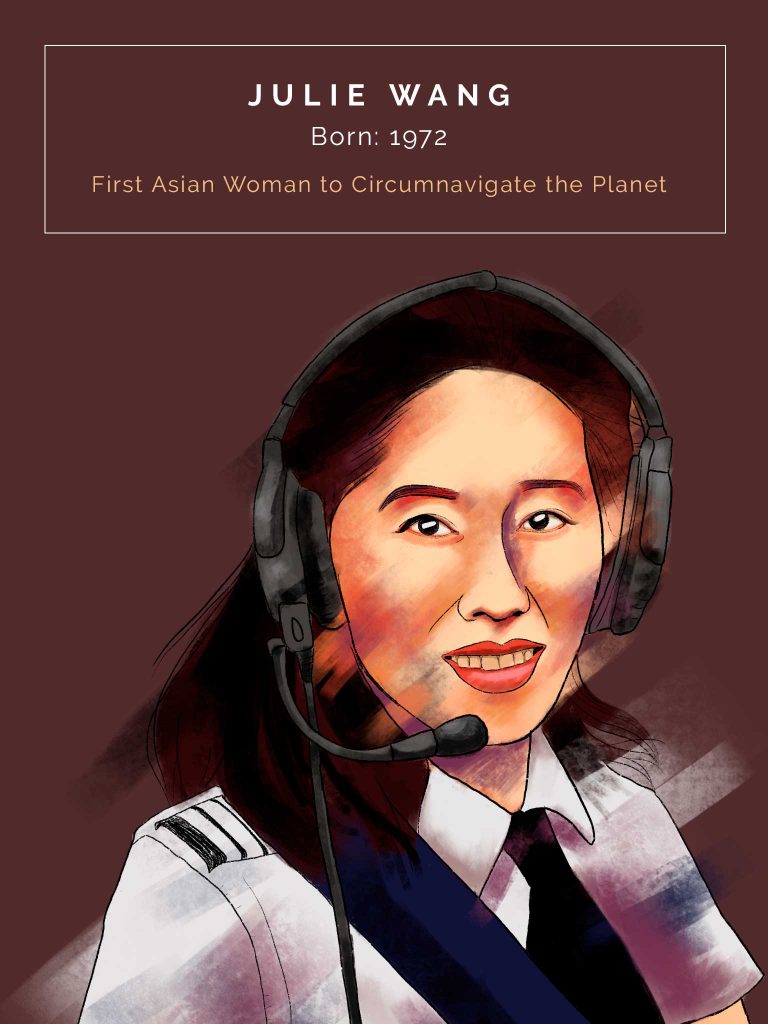 Julie Wang is a currently active airline pilot and flight instructor, who was the first ever Asian woman to circumnavigate the Earth in an aeroplane. Additionally, Wang is the first ever Chinese woman to fly around the world – making her only 1 of 9 women ever to do so.

Wang’s career began in journalism and communications and she only began flying in 2011. By 2012 she had already become a multi-engine, instrument-rated commercial pilot. In 2013 she earned her flight instructor qualification and in 2016 she took on her solo circumnavigation mission. 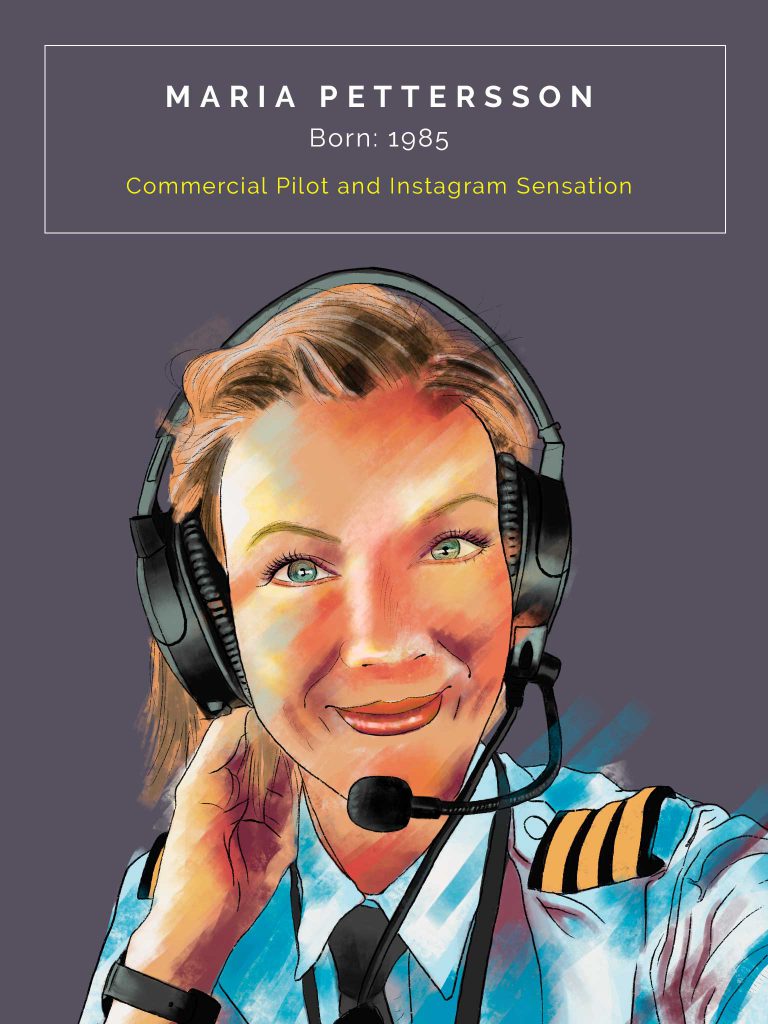 Maria Pettersson is a currently active commercial pilot who is taking the world by storm and shining a new light on modern women in aviation. Pettersson is a Swedish Ryanair pilot who shares stories of her tales around the world on her dedicated blog and Instagram, having become a key influencer in the aviation industry with over 400,000 followers on Instagram sharing in the tales of her journeys.

Pettersson first gained her commercial pilot’s licence in 2011 and has since become an icon in the modern-day aviation industry. Currently women only account for 3% of pilots globally, and Pettersson set up her blog to share her story of being a female in what remains to be a male-dominated environment. She serves as an inspiration for many other women to follow their dreams in aviation, and any other male-dominated industries.

/// UK and Beyond Articles