One of the best parts of travelling is without doubt sampling the local food around the world. There are so many iconic dishes around the globe and we wanted to celebrate some of our favourite international cuisines in a unique way.

To do this we have created illustrations of some of the most famous landmarks around the globe using iconic local food. Our creative illustrations showcase two of the best things about these countries – their signature dishes and their incredible landmarks.

From Big Ben made of fish and chips to the Statue of Liberty built from hotdogs and Himeji Castle created from sushi, our quirky illustrations will make you see these popular world landmarks in a whole new light. 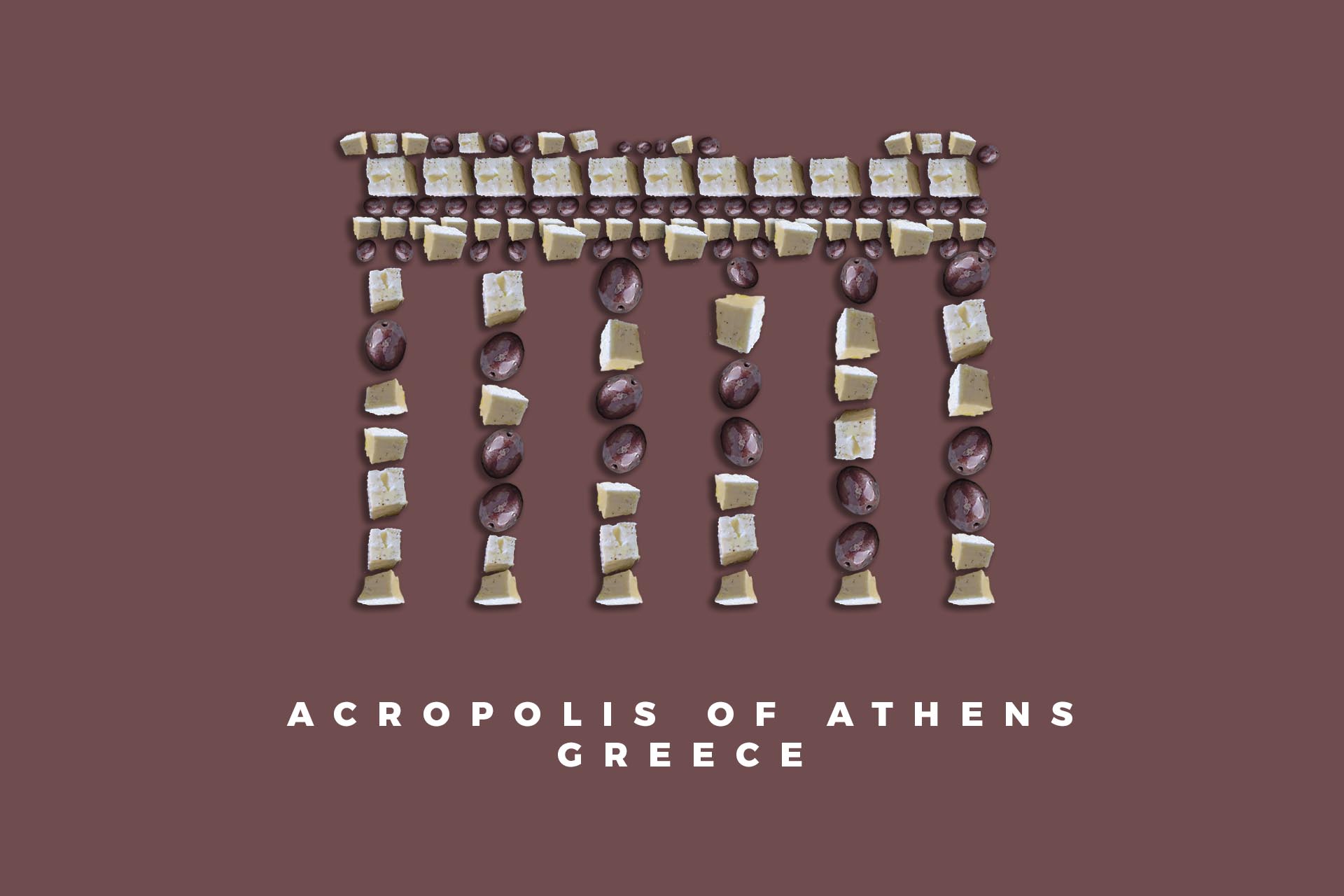 Our Acropolis illustration has been created using the typical ingredients of a Greek salad – feta cheese and Kalamata olives. Feta cheese is a brined white cheese made in Greece using either sheep’s milk or a mixture of sheep and goat’s milk. Kalamata olives are named after the city of Kalamata in Greece. These are large olives of a black or brown colour and a meaty texture. 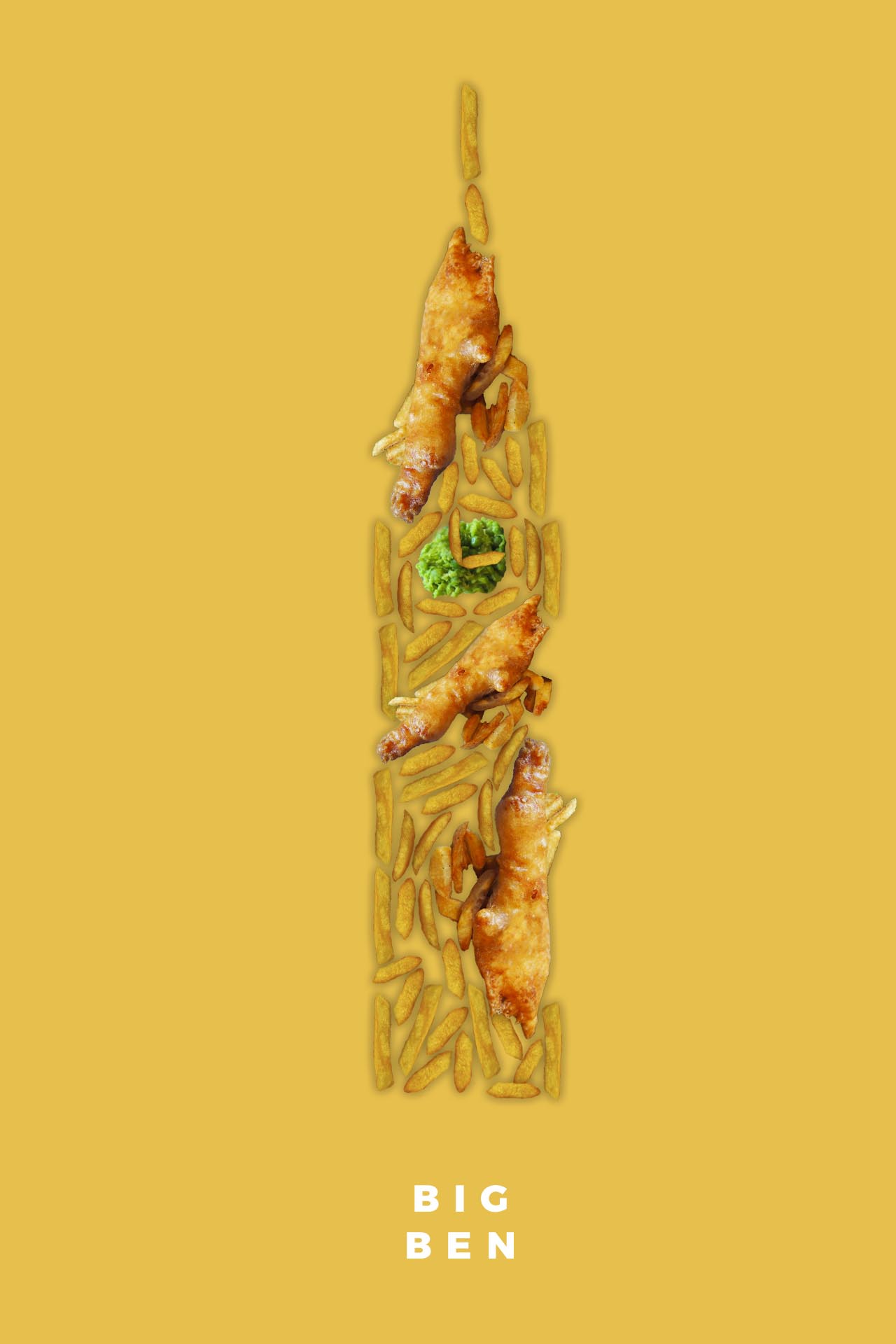 London’s Big Ben is a notable landmark of the city. While people generally refer to the famous landmark as Big Ben, the individual elements of the clock tower are actually The Elizabeth Tower, the Great Clock and the Great Bell. The clock tower has stood proudly in the English capital since 1859.

Fish and chips are a classic British seaside indulgence, and we had to celebrate this beloved British tradition in our Big Ben illustration. Fish and chips first appeared as a part of British cuisine way back in the 1860s, by 1910 there was over 25,000 fish and chip shops across the UK. Of course the dish has now spread around the world but it will always be synonymous with British charm. 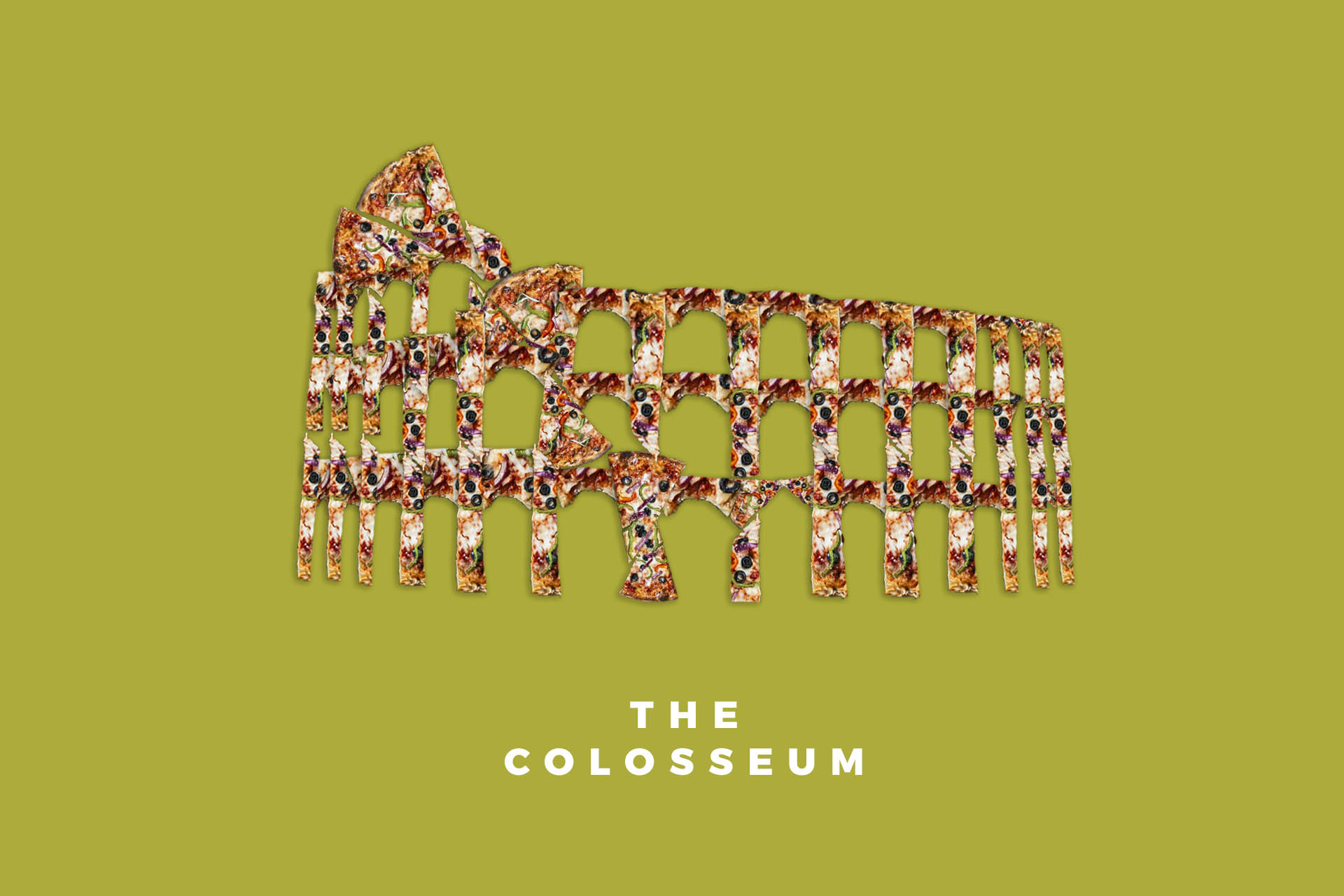 When you think of Rome the first two things you think of are the Colosseum and pizza, and so that’s what we combined in our Italy foodie illustration. The Colosseum is also known as the Flavian Amphitheatre. The construction of this ancient building began back in AD 72 and was completed in AD 80. The colosseum is now one of the most popular tourist attractions in Rome.

Surely one of the best things to come out of Italy is pizza. Whether you like yours as a Margherita, a meat feast or a veggie delight, no-one can deny the deliciousness of pizza and they don’t come any better than in Italy itself. It is believed the modern pizza was invented in Naples and in 2009 the Neapolitan pizza was registered with the European Union as a ‘Traditional Speciality Guaranteed’ dish. 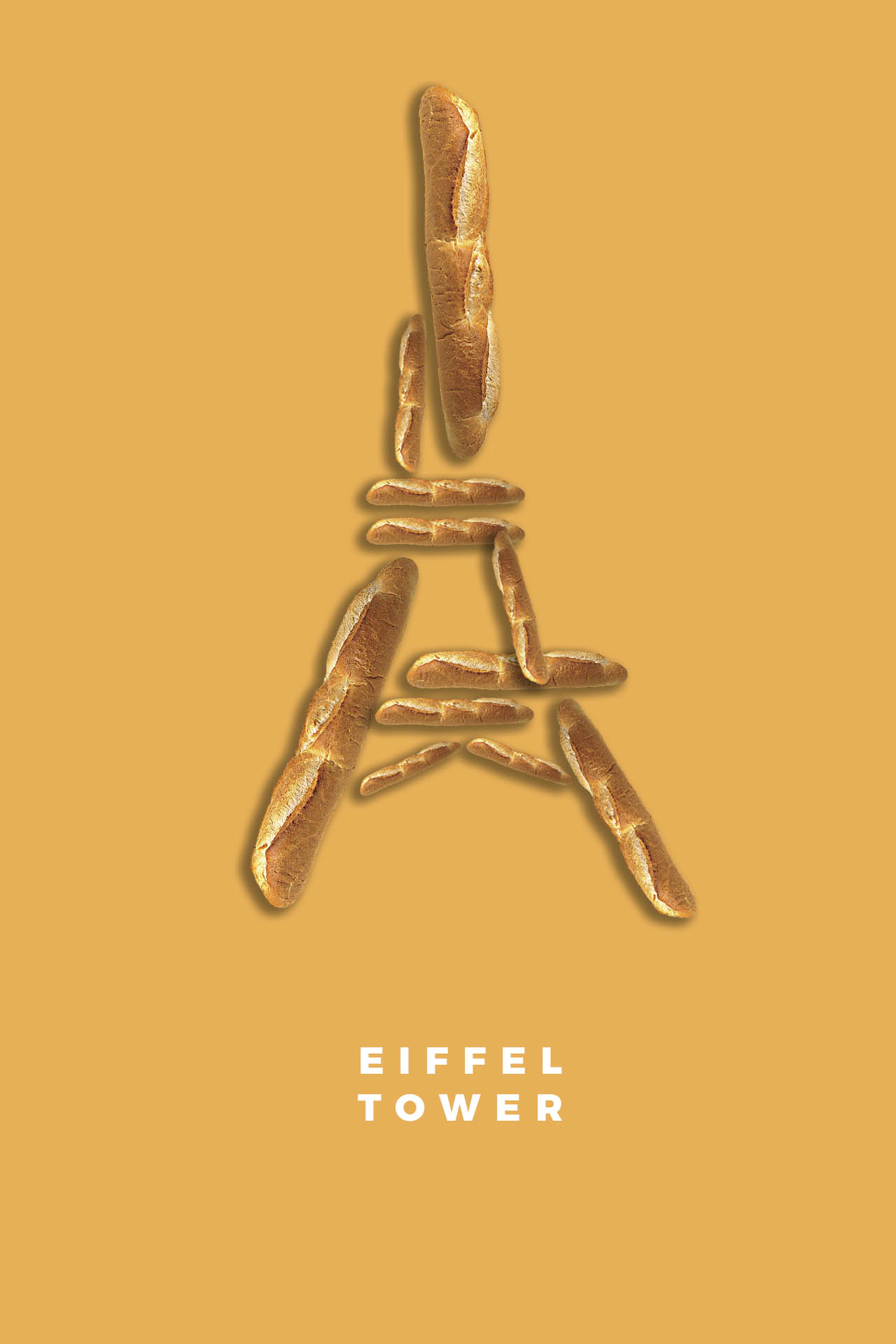 One of the most iconic skylines in the world must be the striking Eiffel Tower in beautiful Paris. The Eiffel Tower was constructed between 1887-89 as the entrance to the World Fair held in Paris in 1889. The famous tower initially received a fair deal of criticism from respected artists and intellectuals, but over time it has become one of the country’s cultural icons. People from all around the world flock to Paris to see the tower and take in the view from the top.

A trip to France wouldn’t be complete without a visit to a local bakery to enjoy some of the freshly baked bread. Baguettes are one of the most common breads in France – often referred to as French bread. The baguette is so important in France that the dough used to make baguettes is defined by French law. It is believed that the baguette stick style of bread first became popular in France back in the 18th century. 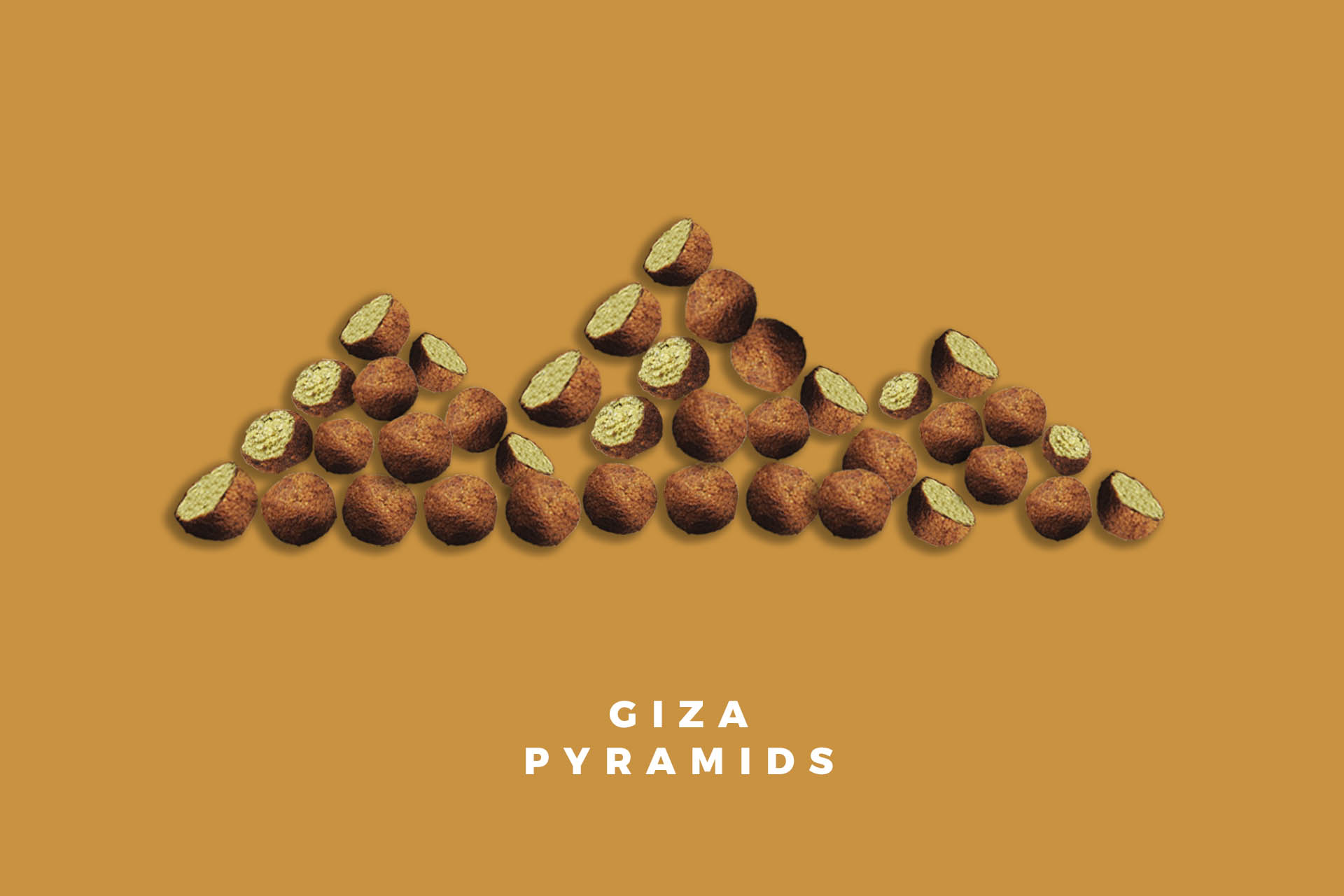 Falafel is a deep-fried patty made from chickpeas, fava beans or both, which is popular throughout the Middle East but it believed to have originated in Egypt. Falafel is a favourite with vegetarians and is a popular street food, usually served up in a pita. 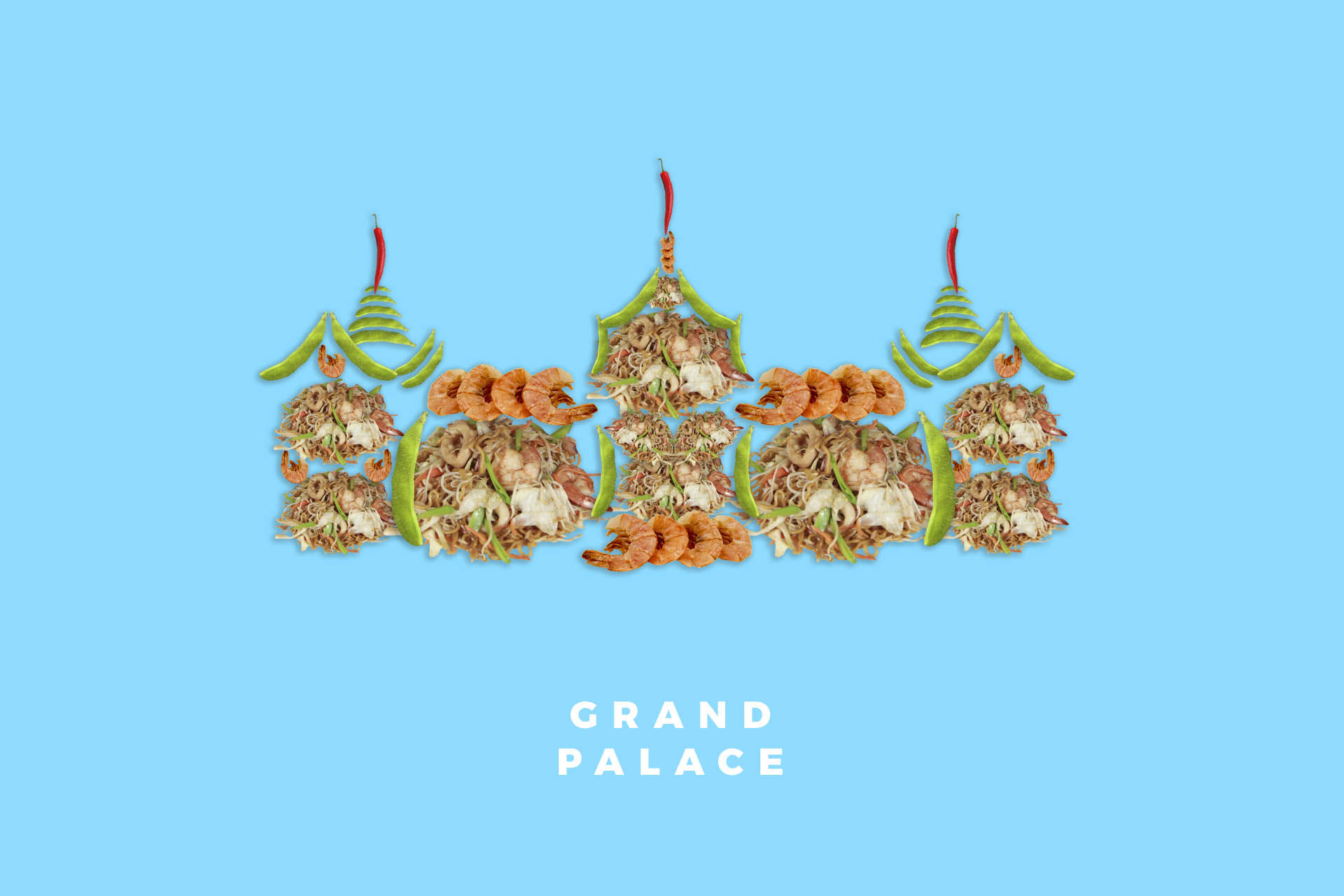 Pad Thai is a traditional Thai dish which has spread in popularity around the world thanks to a surge in Thai restaurants opening around the globe. The classic pad Thai is typically served as a street-food or in casual eateries in Thailand. Pad Thai is a stir-fried noodle dish which usually comes with tofu, peanuts, vegetables and often shrimp or other seafood or meat. Pad Thai has been listed as the fifth most delicious food in a readers’ poll by CNN. 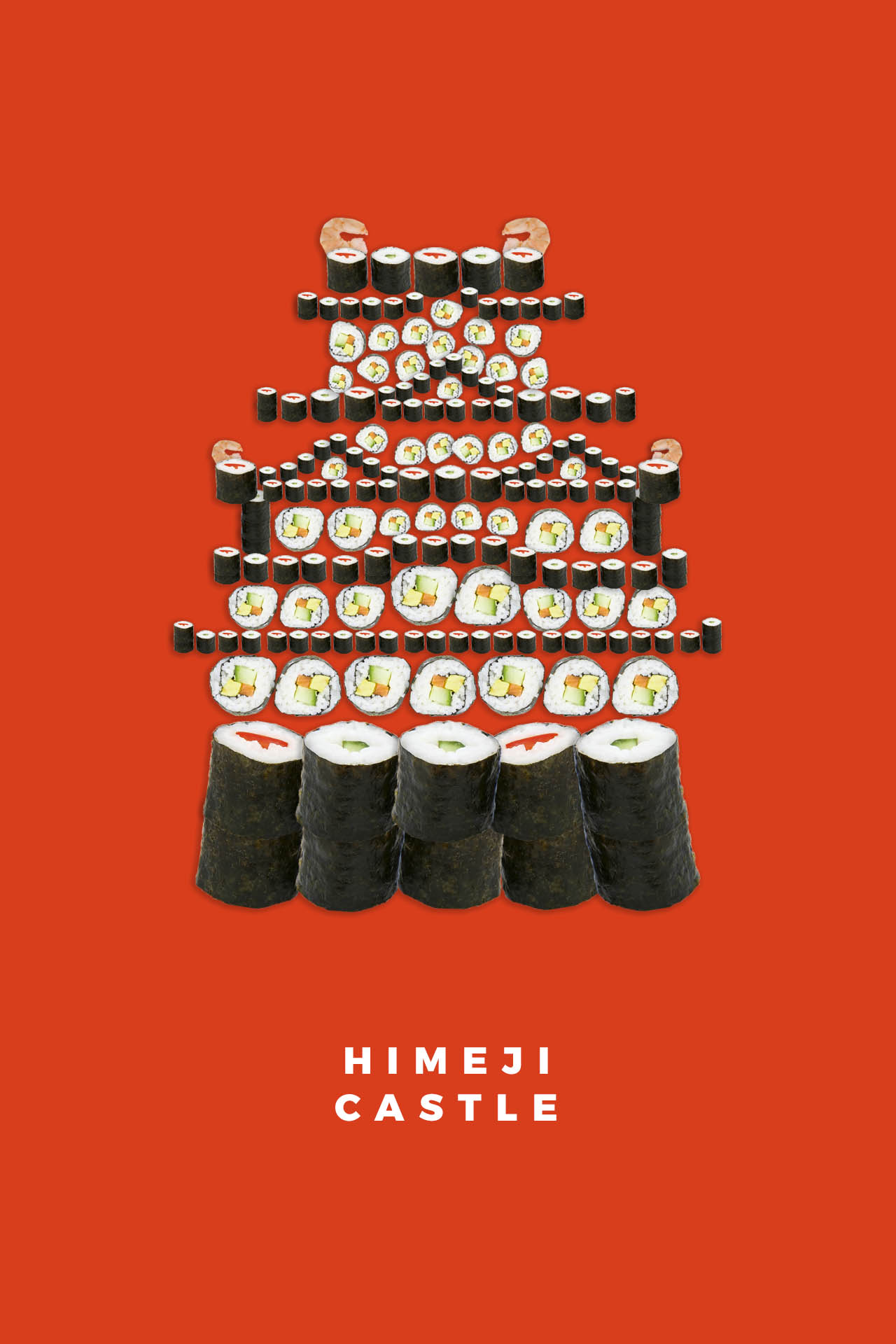 Sushi is arguably the most world-renowned cuisine to come from Japan. The popular dish combines a specially vinegared rice with seafood, typically raw, and vegetables. The classic Japanese cuisine has gained popularity internationally in recent years with sushi restaurants popping up across the globe. 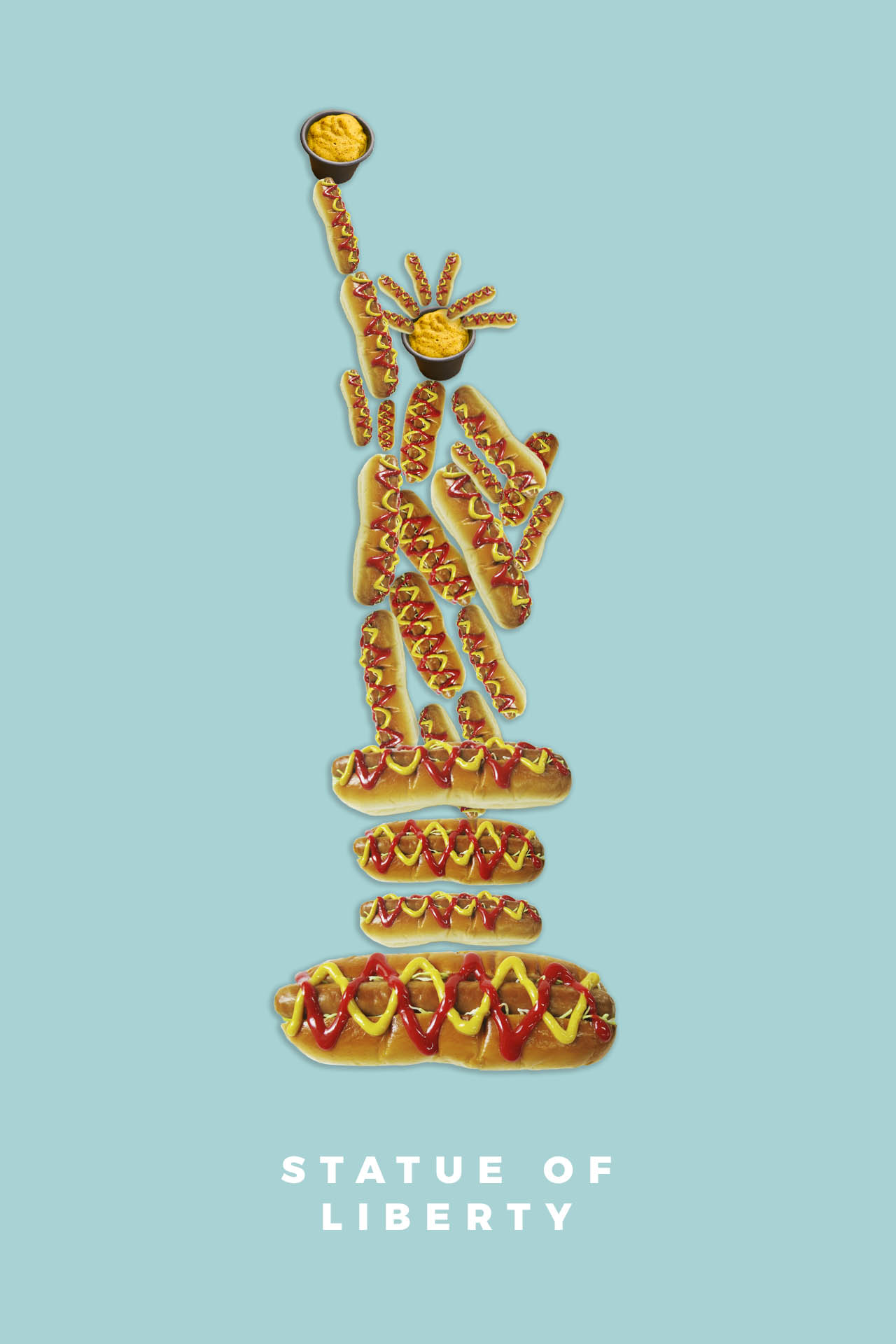 The hot dog was originally imported from the German frankfurter, but popularised as the classic hotdog in the US where it became a staple working-class street food. The hot dog has also become closely associated with baseball and US sport culture. A typical hot dog includes a garnishing of mustard and tomato ketchup, but other popular toppings include everything from gherkins to relish and olives. 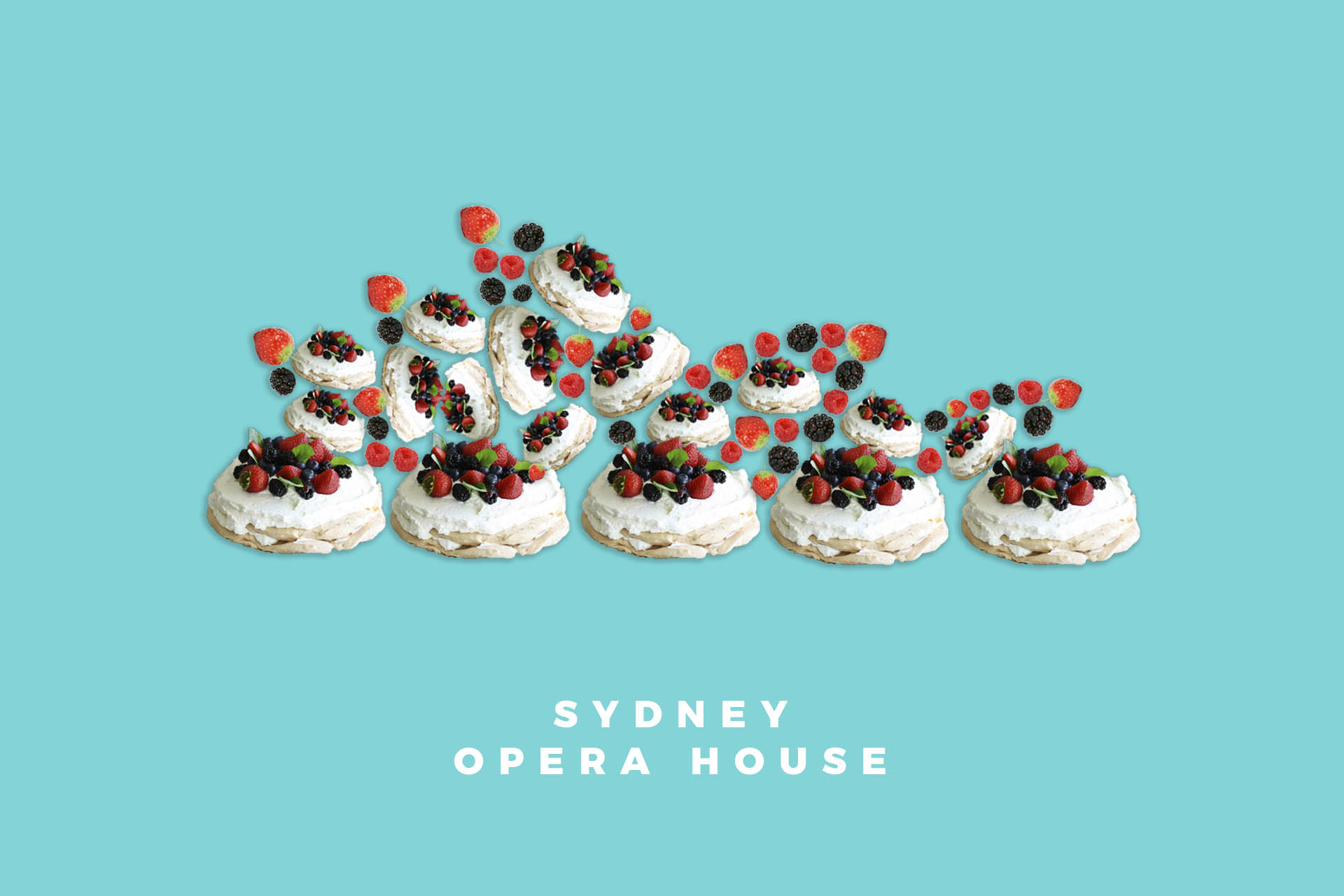 The Sydney Opera House is arguably one of the most distinctive buildings of the 20th century. The building is a multi-venue performing arts centre, which hosts over 1500 performances annually. The Sydney Opera House has been an UNESCO World Heritage Site since 2007. The iconic building was first opened in 1973 and was designed by a Danish architect. 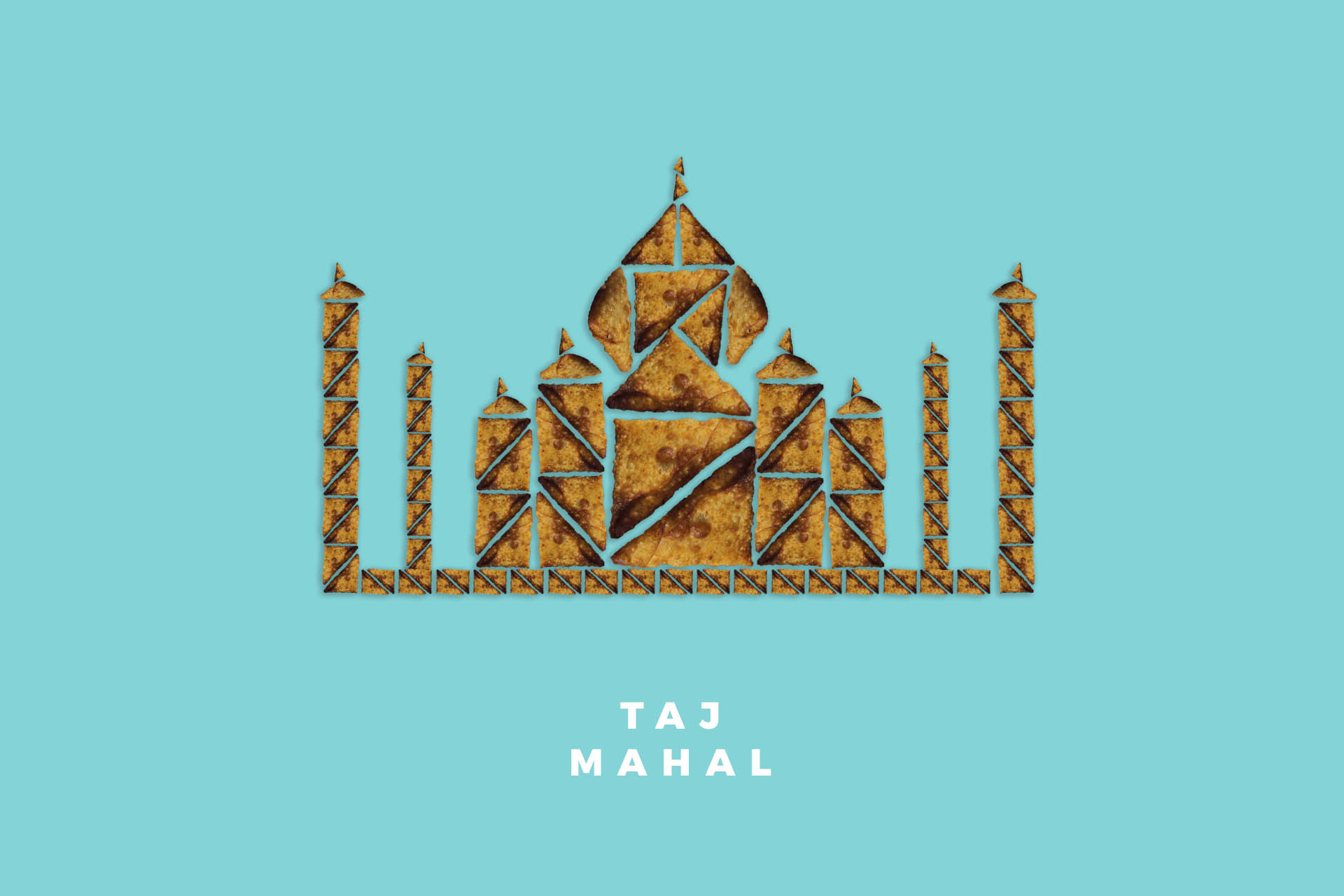 The Taj Mahal is a world-famous mausoleum on the city of Agra, India. The building was first commissioned in 1632 by the emperor Shah Jahan to house the tomb of his wife. The original construction of the Taj Mahal was completed in 1643 but ongoing development of the building continued until 1653. The building has been a UNESCO World Heritage Site since 1983. The name Taj Mahal means ‘Crown of the Palace.’

Samosas are a popular appetiser and snack in India, and across other parts of Asia. Samosas are a fried pastry filled with ingredients including minced lamb or beef, spiced potatoes, onions, peas and other fillings. In India samosas generally stick to vegetarian fillings and are served with a mint chutney. Samosas have also become popular worldwide and are a typical item to find in Indian restaurants around the world.

/// UK and Beyond Articles