The most romantic time of year is coming up, and with that comes one thing that’s on everyone’s mind: sex. Let’s face it, everything about the winter period is geared towards looking, feeling, and being sexy, from Halloween costumes to sexy lingerie for Christmas celebrations, and the constant incessant reminders that Valentine’s Day is only 4 (4!!!) months away.

But the one question that’s probably not asked enough, but definitely should be, is where in the UK is actually the sexiest? Well, we asked the question, and the results are, for the most part, probably what you would expect. Except for a few, very rogue results. 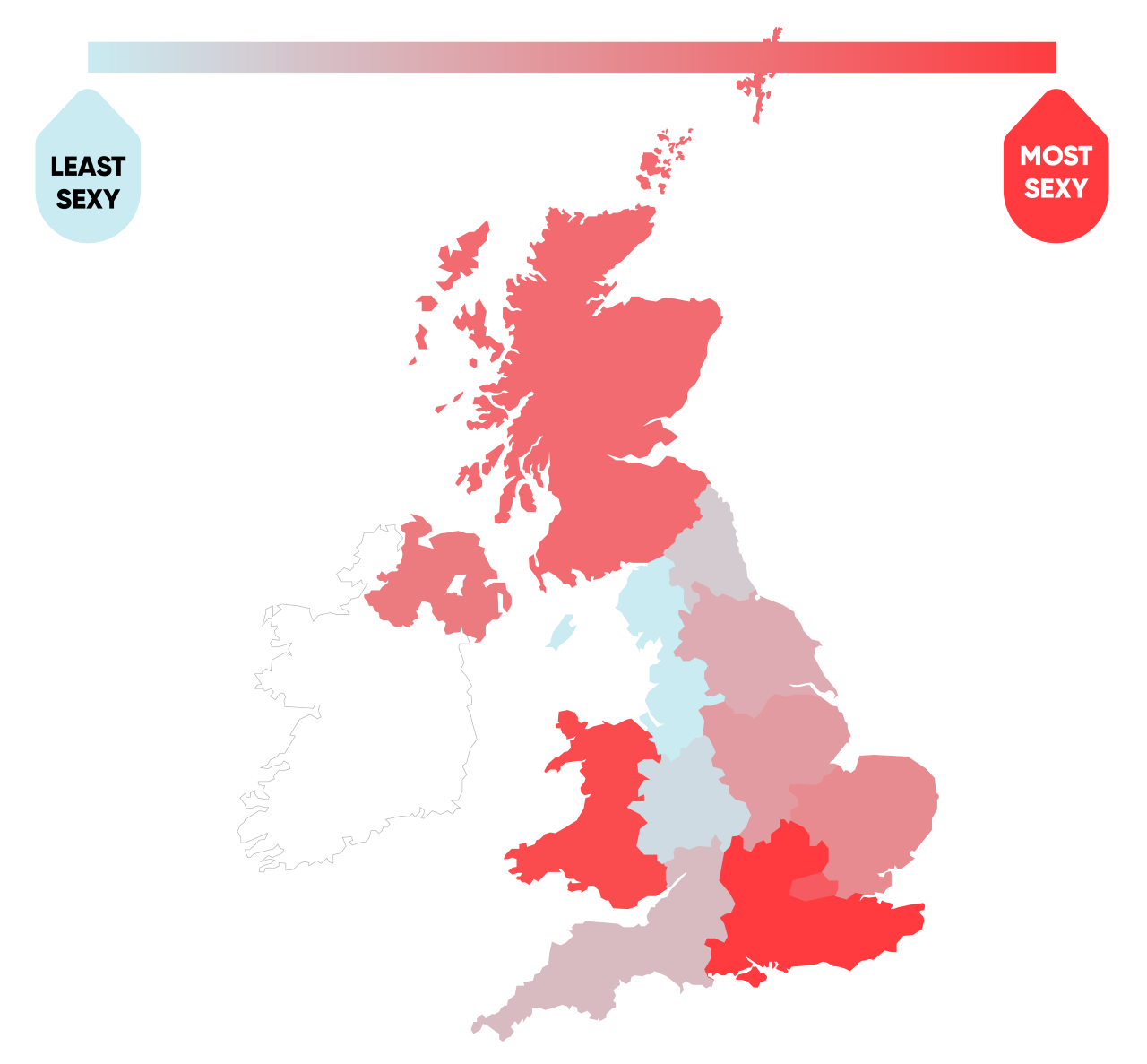 First things first, in order to properly determine the sexiest UK region, we had to look at a lot of factors. And by factors, we mean totally scientific studies conducted by actual scientists (read: not actual scientists at all), about the sexiest UK accents, how healthy different regions are, the most attractive, the most intelligent, most romantic, and the most sexually satisfied.

The sexiest region in the country? The South East, duh. I mean, the accent alone is enough to push it right to the top – who doesn’t love a bit of Queen’s English making you feel totally inferior and common? It’s also the healthiest; dying early is 20% more likely for people who live in the north of England than anywhere else in the UK, and a 35-44 year old is 49% more likely to die suddenly if they live in the north rather than the south. People who live in the south east are also the second most loving region in the UK, with 90% of people saying they enjoy expressing their love.

Surprisingly, the least sexy region was the North West of England. We say surprising but actually is it? A little bit surprised Scotland managed to come 4th, but I guess the North West doesn’t even have a cute accent working for it. Unless you count the Scouse accent, but who does? 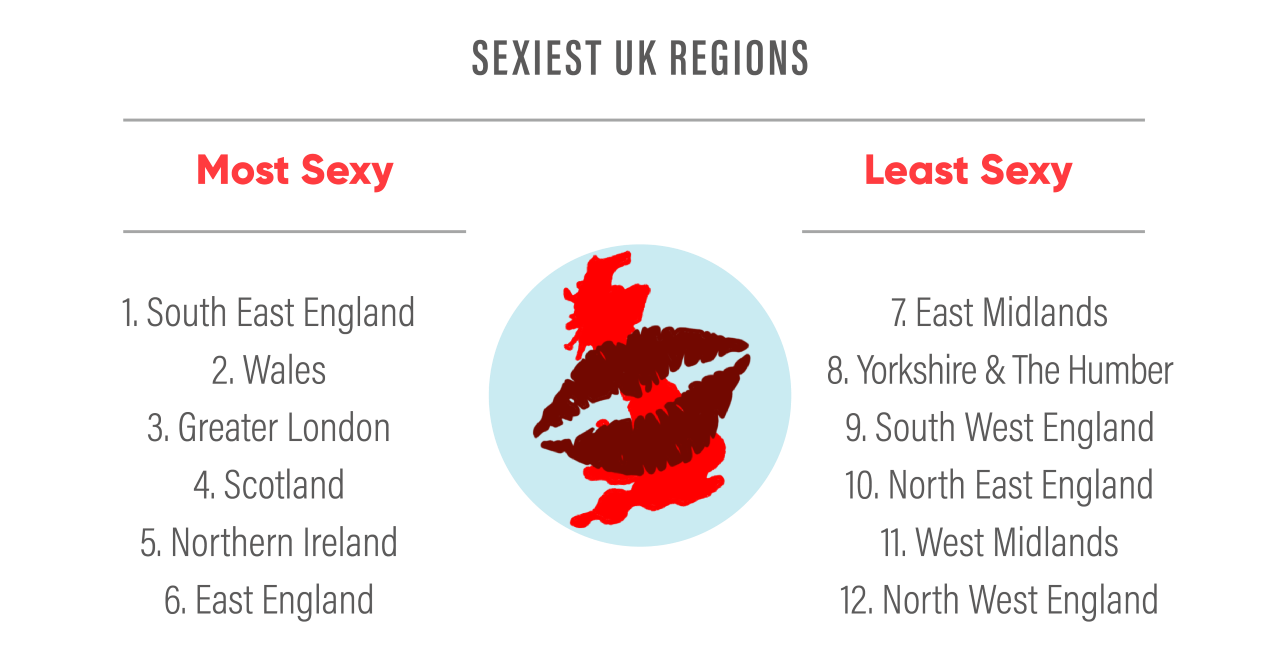 Have a look below at our breakdown of the sexiest regions across the UK.

The UK, in the grand scheme of things, is a very small collection of islands. And yet somehow, there are at least 12 different accents? The rest of the world might like to think we’re all tea drinking, proper, formal, best friends with the Queen and all the rest, but quite clearly that’s not the case.

The standard, stereotypical British accent is only spoken by one region: the south east, while everywhere else can sound so vastly different they could almost be different countries (they’re not, no matter how much they might wish they were – looking at you, Lincolnshire).

The Welsh accent actually came out on top, probably thanks to its associations with the dulcet tones of Tom Jones, and this was followed by the Scottish accent – again, associated with some very attractive people who just happened to be Scottish, Gerard Butler anybody?

Where you’re born, and where you spend your life, can have a massive impact on your health. This sounds obvious, but it’s not as simple as just some air pollution – if that were the case, London would undoubtedly be the worst place. It’s not though, it’s actually the 4th healthiest region in the UK. Nevertheless, the north-south divide is still very much in place: the north east and the north west of England came in at 10th and 11th place respectively.

Lifestyle choices such as smoking, alcohol, and diet alongside economic factors such as employment, education, and housing all affect the healthiness of a region. That being said, it’s not surprising that the South East of England was the number one healthiest region.

According to Badoo, the world’s largest dating app, the most attractive region is Scotland, based on the most right-swiped regions for 18 to 30-year-old users of the app. Scotland had a staggering 522 million right swipes in 2017-2018, and 7.8% of these were within close proximity to the big Scottish unis such as Edinburgh, Glasgow, and St. Andrews. London came second with 455 million right swipes, and Wales rounded out the top 3 with 370 million right swipes.

Another north-south divide, it is no surprise that the top 6 regions for intelligence are from the south – graduates are flocking to the capital in their thousands, causing degree blackspots to show up in some of the poorest areas of the country. Indeed, in the poorest areas of the country, the proportion of working-age population with a degree is falling while in the richest it has significantly increased.

Not only this, but while it is already less likely for those from poorer postcodes to achieve a degree, once they have they are unlikely to return to their hometown, creating massive areas around the country that suffer from a severe lack of highly skilled people.

Everyone loves to be romantic – or rather, everyone loves it when someone is romantic to them, at least once in a while: sending flowers, whispering sweet nothings, even writing love letters. Turns out, 93% of people in the UK believe themselves to be loving – and yet somehow some regions are definitely more loving than others.

Completely unsurprisingly, London hit the top spot for wealthiest region, with the highest GDP per capita for the whole of the UK. Following this, again unsurprisingly, the south east came second, with the second-lowest level of unemployment at 4%, and a 6.1% increase in millionaires since 2016.

On the other end of the spectrum, the North East is last despite seeing a 4% rise in house prices and a 2.8% rise in GDP, as did Yorkshire and the Humber.

The most important north south divide has always been – and will always be – which half of the country is friendlier, and we have finally answered it: the north east is the friendliest, and London is, well, not.

Following a survey into the sexual habits of university students across the country, it was found that those in the East Midlands were more likely to be into slightly more adventurous bedtime routines.

Those from the London and the North West of England are, apparently, less adventurous in the bedroom. Which is fine, it’s not for everyone. Besides, someone’s got to take one for the team and keep the missionary movement alive.

Wales and Yorkshire & the Humber are the most sexually satisfied regions, with 20% of people from both regions claiming to have sex between 11 and 20 times in a month. Honestly, good for them, that averages out at every other day.

The south west and south east, not so much, with only 15% and 18% respectively having sex that often. But it’s fine, because the south west is 4th for the most sexually adventurous, so at least when they are doing it they’re having a good time.

To compile the UK seXy Factor we scoured multiple data to analyse how every region faired across various physical and social sexy traits. The specific categories we looked at were:

Tips for First Time Travellers to the UK