Travel on a Budget to Liverpool UK

Famous as the home of the Beatles, Liverpool is a wonderful place to spend a short break, however if you don’t plan your stay well in advance, you may find that it costs you a lot more than you expected.

This helpful travel guide for holidaymakers on a budget helps you to find cheap ways to experience the best of the city and shows you how to make the most of your finances during your visit.

10 of the Best Ways to Enjoy Liverpool on a Budget

Liverpool has been called ‘The World in One City’, and with its fascinating history and culturally diverse atmosphere, world-class museums and galleries, UNESCO World Heritage site as well as beautiful beaches and parks, there is no shortage of things to see and do. The best part? Many of the top attractions are either free or cheap.

1. Go on a free walking tour
Want an insider’s view of Liverpool? Don’t want to spend a lot of money? Stay on budget and take in the most iconic buildings and the hidden gems of the city on a free tour delivered by an enthusiastic local guide.

Including sights such as the famous Three Graces, the 3-hour walking tours organised by SANDEMANs NEW Europe will leave you both informed and entertained.

2. Go back in time
From Titanic to live bugs, Liverpool’s museums provide many hours worth of free diversion. Delve into the city’s past in the Museum of Liverpool, then get a sense of the city’s role as a major port on the world stage at the Merseyside Maritime Museum before heading to the International Slavery Museum housed under the same roof.

The Liverpool War Museum features a WWII bunker that you can walk through, while the World Museum takes you around the globe and beyond with exhibits featuring numerous interesting objects from Egyptian artifacts to Martian meteorites.

3. Walk in the footsteps of The Fab Four
Whether you’re a Beatles fan or not, you’re bound to run into The Fab Four sooner or later during your visit. While it’s easy to spend a lot of money touring the many places associated with the iconic act, it’s not necessary to break the bank to get some of the action.

Grab your camera and head to Mathew Street, a small area packed with Beatles memorabilia from plaques to statues (also the location of The Cavern Club, the venue famous for being the birthplace of the group), or take a walk along Penny Lane and see how many of the things mentioned in the song you can spot. 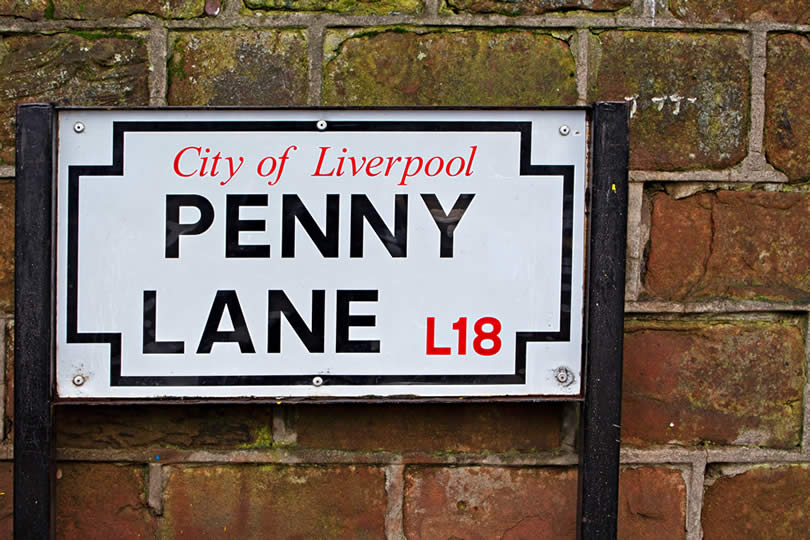 4. Feast your eyes
Art lovers are spoiled in Liverpool and the free entry to the major galleries sweetens the deal. For an impressive collection of paintings and sculpture from the 13th century to present day, head over to The Walker Art Gallery, or for the country’s largest collection of modern and contemporary art outside London, make Tate Liverpool your first port of call.

The Bluecoat centre for the contemporary arts is also well worth a visit – a thriving hub of artistic activity, it was also the venue for Yoko Ono’s very first paid performance in 1967. For something a bit different, the Super Lamb Banana, the artist Taro Chiezo’s humorous take on the issues of genetic engineering in sculpture form, is over 5 metres tall, bright yellow and not to be missed.

5. Hop on a bike
Take advantage of the budget-friendly Citybike cycle hire scheme and explore the city on wheels. Just £3 gives you a day’s membership with two hours of credit, which makes getting around both cheap and fun. Enjoy the lovely Merseyside views on the popular Otterspool Prom, or head to the green corridor of the Liverpool Loop Line that runs along an old converted railway line from Halewood to Aintree.

6. Catch the festival fever
Many of Liverpool’s annual festival highlights are free to attend. Head over in February to enjoy the festive atmosphere of the Chinese New Year Party – expect drums, firecrackers and colourful dragons parading through the Chinatown. June sees the buzzing 2-day celebration of African music and culture, Africa Oyé, take over Sefton Park, while in July, it’s time for samba and fabulous costumes at the unmissable Brazilica Carnival Parade.

7. Enjoy the park life
With over 10 sq km of green spaces including many English Heritage protected Victorian parks, Liverpool is begging you to pack a picnic and go enjoy the outdoors. You could explore the Palm House, the Fairy Glen and Old Nick’s Caves in Sefton Park, take a walk around the Japanese Garden in Calderstones Park, hop on a train on the miniature railway in Royden Country Park or discover the Walled Garden in Greenbank Park.

8. Admire some stunning architecture
Eye-catching and free to visit, the city’s two cathedrals are worth checking out. The Gothic Liverpool Cathedral features 1700 sq m of stained glass, the largest organ in the country and the world’s heaviest bells, while the unusual shape of the Catholic Metropolitan Cathedral couldn’t provide a more striking contrast to its Anglican counterpart. 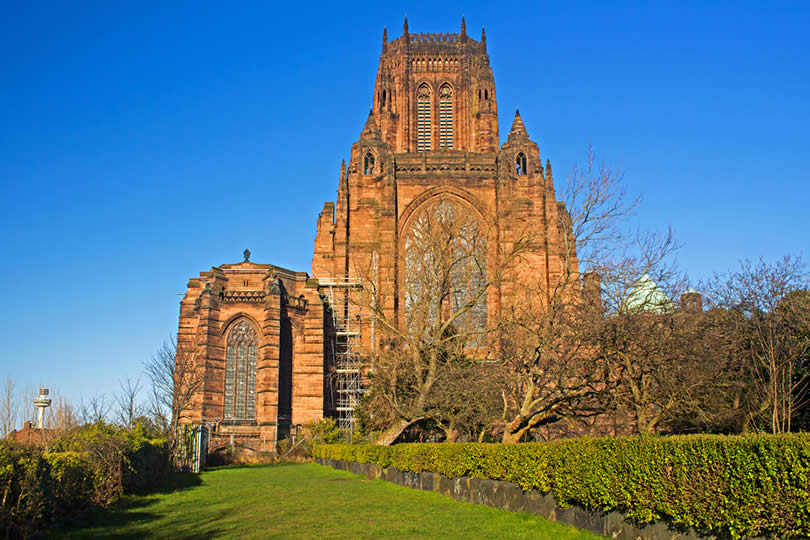 9. Explore the coastline
No visit to Liverpool is complete without a trip to the seaside. Discover Britain’s oldest brick-built lighthouse as well as superb coastal walks and fine views of Wales at the North Wirral Coastal Path, or enjoy a walk along Britain’s second longest pier on Southport Beach.

On New Brighton Beach you can board the Black Pearl – a pirate ship constructed entirely out of driftwood – or find your way to the Crosby Beach to see Another Place, a 100 curious life-size cast-iron figures gazing out to sea.

10. Go to the library
Yes, really. While it might not sound like much of a tourist destination, you won’t regret a visit to the Liverpool Central Library. Arguably one of the most beautiful and photogenic libraries in the country, its narrow stairs spiral up the many levels of the spacious interior, while the magnificent reading rooms add to the charm of the building.

Inside you’ll also find some famous and rare books, including James Audobon’s ‘Birds of America’ – one of the most valuable tomes in the world.

How To Get There

Possibly one of the most economical ways to visit Liverpool is to take your own vehicle. Many hotels and B&Bs in the area have their own complimentary car parks, and when you bring your own car you won’t need to worry about the cost of public transport and taxis to get between attractions during your break. There are, however, several other travel options open to you.

If you book your rail ticket well in advance you can make a substantial saving on the cost of train travel. By using one of the many railcard such as the Young Person’s, Senior or Family railcards you can cut the cost of rail fares and make your journey much more affordable.

One of the cheapest ways of all to travel is to use the Megabus, which offers fares for under £10 per person when booked in advance online. 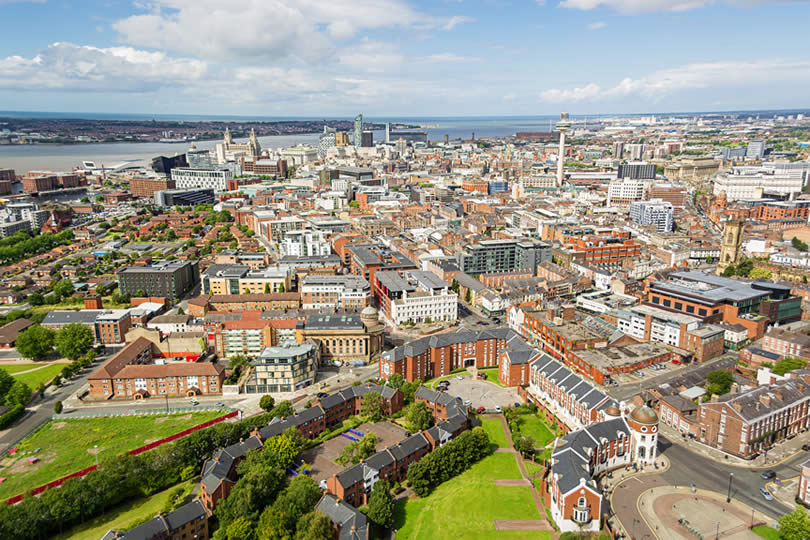 Getting Around The City

The centre of Liverpool is pretty compact, making it easy to walk between attractions. Not only is this a free mode of transport, but it also makes it possible to appreciate the lovely architecture and friendly atmosphere of the city more fully.

If you are planning on sightseeing in the wider Merseyside area, the Saveaway pass is a great idea. This one day off peak ticket is valid on all trains, buses and the Mersey ferry and represents an affordable way to get more out of your trip.

Food And Drink On A Budget

While staying in self catering accommodation and preparing your own meals is probably the best way to save when it comes to food and drink in Liverpool, there are ways of eating out in the city more economically. Many pubs in the area offer affordable meals, and there are several branches of the popular JD Wetherspoons chain which offer great value food for all the family in the city.

If you like to dine in well known chain restaurants, you should check out sites like Vouchercloud which often feature discount deals for top eateries, especially during the week. The Liverpool Groupon site is another useful resource for finding affordable food and drink on a budget.

If you are travelling with the family or with a large group, finding self catering accommodation is probably the most affordable choice. If there are more than four of you, you are much more likely to be able to find a suitable house or apartment for less than the cost of two hotel rooms for the duration of your stay, and you will have the added benefit of self catering facilities to save on your food and drink.

If you would prefer to stay in a hotel, Liverpool boasts all of the classic low cost brands such as Travelodge and Premier Inn, which represent an affordable way to stay in the heart of the city. Liverpool also has its fair share of low cost Bed and Breakfast properties such as The City B&B and The Knowsley B&B which charge low amounts per person per night.

If you are travelling solo or don’t mind sharing a room, the Euro Hostel in the heart of the city is an ideal choice with beds starting from just £10 per night.

Carlisle UK : a budget guide to help you save