Spending a Weekend in Thorpe Park

Where did your best memories as a child happen? Along with a smattering of nostalgic musings, including the first house you lived in and your first day at high school, there’s a good chance that you’ve got fond memories of the first time you visited a theme park.

For the people who visited London on holiday as children, that theme park is probably Thorpe Park, one of Britain’s premier theme parks located in Chertsey in Surrey, right next to the M25 ring road. The setting for the theme park is nothing less than stunning. Despite the fact that it is located in south-west London, it’s surrounded on all sides by lakes, making you feel as if you’ve escaped the confines of the urban jungle and have reached adventure island.

Thorpe park’s reputation, however, isn’t just down to its great location. It’s also thanks to its emphasis on rides. It’s a kind of Mecca for thrill seekers all over the country, and for the past 30 years, ever since the park opened, it’s focused on having the “biggest and baddest” rides in the country.

Recently, I revisited Thorpe Park on a mission to relive my childhood memories. The park itself has changed a lot since then, adding lots of exciting experiences and rides. Top of the list of attractions is, of course, the roller coasters which decorate the skyline in a contorted vista of metal.

The park’s most iconic and prominent ride is Stealth – an experience that established Thorpe Park as a thrill-seeker’s paradise. Stealth rises up in front of you by more than 200 feet and is visible from the London Orbital, towering over the park. As I stood in the queue, I felt nervous just looking at it as the people in front of me were strapped to the ride’s car and rocketed from 0 to more than 80 mph in under two-second.

The ride itself is probably the most exhilarating in the whole of the UK. It gives you an unparalleled feeling of acceleration over the first 300 feet or so of the track before it then climbs vertically. The vertical climb is actually the gentlest part of the ride, providing a brief respite before plummeting you back down to Earth on the other side of the loop and then rocketing you all the way back to the starting line. 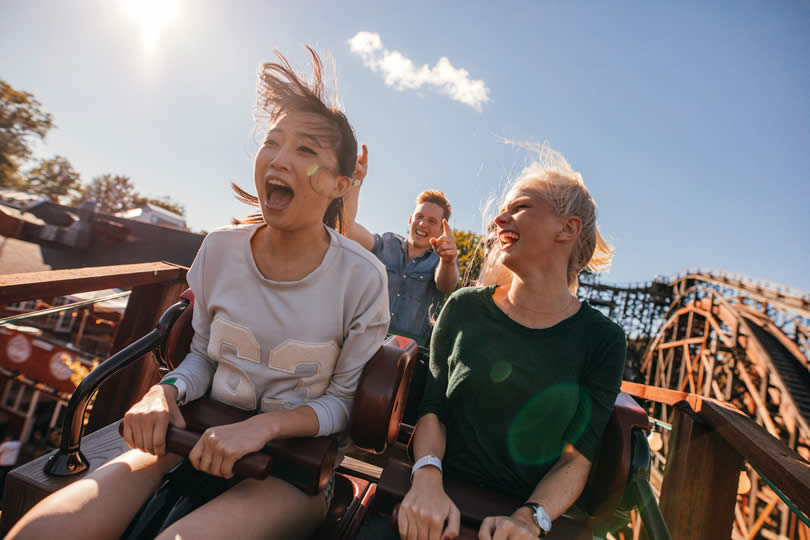 The next ride I rode on was Colossus, an ageing rollercoaster with more than ten inversions and a massive vertical loop-the-loop. To be honest, when you’re on the ride and its clanking around the track, you don’t have the chance to count the number of times you go upside down – you just know that it’s a lot.

Thorpe Park, however, is a theme park where the roller coasters have two distinct personalities. On the one hand, there are Stealth and Colossus which, while thrilling, aren’t trying to horrify you at the same time. And on the other, there are rides like Saw and Darren Brown’s Ghost train which work hard to frazzle your wits in every conceivable way.

Looking up at Saw – The Ride from the ground and you see that the ride is a sorted twisted horror contraption. The freakiest part is the more-than-90 degree drop which has all but the bravest riders closing their eyes, wishing it would end. I climbed aboard the ride hoping that the relatively short drop I had seen from the ground wouldn’t be too terrifying, but unfortunately, I was proven wrong and let out an involuntary scream.

Of course, it’s not all blood-pumping, stomach-churning stuff. For people who prefer their rides to be of the gentler variety, there is the King Pig’s Wild Hog Dodgems, the Angry Birds 4D Experience and Mr Monkey’s Banana Ride.

I had plenty of fun on the Wild Hog Dodgems and enjoyed the fact that they were themed around Angry Birds, the runaway hit gaming app. If you have younger children and don’t want to put them off theme parks for life, then you can also head over to Mr Monkey’s Banana Ride, a swinging ship that spins up and down quite gently.

Spending a weekend at Thorpe Theme Park won’t leave you, or your family bored in my opinion. Not only are accommodation facilities in the park and the surrounding area of excellent quality, but there’s something here for all the family. The park isn’t just about scaring yourself witless: there are also numerous family rides which make for a relaxing interlude and help your stomach to recover.

If you like your theme parks to be relatively quiet, the best time to go is before the summer. From early spring on out, the park gets busier and busier, meaning longer wait times for the most popular rides.