This 13th-century coaching inn has stunning views across the River Avon to the Salisbury Cathedral. It has a bar, a restaurant, free Wi-Fi and Salisbury Railway Station is just 10 minutes away. All rooms are... read more

Set in 20 acres of landscaped grounds, Alexandra House boasts impressive leisure facilities and comfortable rooms. The hotel is just over 6 km from the centre of Swindon. The superb health and leisure club offers... read more

In a 16th-century inn, Castle and Ball is rich in character, and features a traditional restaurant and ale bar. The inn is situated on Britain’s widest high street, in the heart of Marlborough and comes... read more

Overlooking a lake and parkland, Stanton House Hotel is an idyllic stone house that nestles amid the picturesque Wiltshire countryside. There are two restaurants and all rooms are en suite. Comfortable rooms all come with... read more

Just minutes from junction 15 of the M4, this modern hotel has a leisure centre, an international restaurant and a scenic garden terrace. Holiday Inn Swindon is less than 3 miles from the town centre.... read more

Nestled within 12 acres of picturesque Wiltshire countryside, this hotel is a stylish venue where you can relax and revive. Whatley Manor offers a twelve course dining experience from Thursday to Sunday. The Grey's, the... read more

The Riverside is set amid 1.5 acres of scenic gardens, rolling lawns and towering trees which back onto the banks of the rivers of Avon and Nadder, Only a few minutes' walk from the centre... read more

The family-run Chapter House is situated in the heart of picturesque Salisbury. The listed Tudor building is rumoured to have housed kings Charles I and Charles II. Free WiFi is accessible. The 17 en-suite rooms... read more

Situated in the heart of Wiltshire on the A303, Holiday Inn Salisbury-Stonehenge offers stylish accommodation and free parking and is the nearest hotel to Stonehenge. All rooms have a modern decor and luxurious bedding. Room... read more

A mile from Salisbury city centre, this 4-star (AA) B&B is in its own beautiful gardens, well situated on the A36 for Stonehenge, Salisbury Cathedral, Old Sarum and Longleat. Cricket Field House is totally non-smoking.... read more

Situated 25 miles from Cheltenham Racecourse, the tranquil Pettifers Freehouse Hotel is nestled on the southern edge of Cotswolds in the attractive stone-built village of Crudwell. Set in the heart of the charming peaceful countryside... read more

In a peaceful countryside location, only 11 km from Bath, these beautifully converted farm buildings offer self catering cottages and en suite rooms with their own separate entrance. In Bradford on Avon, on the edge... read more

This hotel with an AA Rosette restaurant offers an intriguing blend of luxury and intimacy, along with traditional country house style and elegance, complemented by personal service. Staff will make your stay one to be... read more

The Horse And Groom Inn

In the beautiful Wiltshire countryside, this traditional country inn offers stylish and attractive accommodation; Michelin-recommended food; and peaceful, tranquil surroundings for a relaxing or romantic break. Free WiFi is accessible throughout. The Horse & Groom... read more

Lydiard House Hotel & Conference Centre is set within an elegant Grade I listed mansion house overlooking 260 acres of parkland very close to junction 16 of the M4. There are 13 meeting rooms of... read more

The White Hart is located in the town of Crickdale just a 10-minute drive from Swindon. It offers rooms with free Wi-Fi and shower rooms, home-cooked food and free parking. Rooms at the White Hart... read more

Cathedral View B & B

Cathedral View offers you welcoming Bed and Breakfast accommodation and is a most convenient base for visiting the lovely City of Salisbury in Wiltshire. Located overlooking Salisbury Cathedral, the house is a Grade ii listed... read more

Surrounded by lush woodlands on the edge of Swindon’s historic Old Town, this 4-star hotel is the perfect choice for a relaxing break in Wiltshire. At the gateway to the Cotswolds, Oxford, Bath and many... read more

This prominent Grade II listed building is situated on the A4. Built in the 18th century, the original Brewery House is still intact and overlooks the medieval courtyard. Lansdowne Strand has individually designed en suite... read more

Adjacent to the medieval bridge crossing the River Avon, The Swan Hotel - Bradford-on-Avon is an enchanting 15th-century coaching inn, located in the heart of historic Bradford on Avon. Situated 7 miles from Bath, it... read more

SN26 7AS, Swindon, The Ridge, Blunsdon

The George Inn is a traditional English coaching inn set in 2 acres of beautiful grounds, on the banks of the River Wylye in Longbridge Deverill. It offers stunning views, freshly prepared food, a traditional... read more

DoubleTree by Hilton Swindon Hotel is located just off junction 16 of the M4 and 3 miles from Swindon town centre, near the Wiltshire countryside. Lydiard Park and GWR Designer Outlet are just a 5... read more

Featuring an onsite nightclub, The Cathedral Hotel offers DJ entertainments on Thursdays, Fridays and Saturdays until 02:00. The Cathedral Hotel dates from the 18th-century and offers contemporary style and comfort within the heart of Salisbury... read more

On Fleming Way, Jurys Inn is a 5-minute walk from Swindon Railway Station and town centre. It boasts a 24-hour reception, bar and restaurant. The stylish bedrooms at the Jurys Inn Swindon feature a Dream... read more

Why Visit and Where to Stay in Wiltshire

There are many reasons why Wiltshire is one of the best places to visit in the UK. Not only can you experience a relaxing stay in the countryside and see some amazing wildlife but you can also learn a lot about the history of the country too.

Stonehenge and Avebury are arguably the two most well known Neolithic sites in the country and they can both be found in Wiltshire. The reason Stonehenge was built and how it was constructed is still a mystery to today as there are no records left behind by the people of the time. Avebury contains the largest megalithic stone circle in the world and is not only a tourist destination but a place of religious significance to pagans. Wiltshire is also home to part of the Cotswolds, an Area of Outstanding Natural Beauty (often referred to as Cotswolds AONB). There are many wonderful walks to go on in the Cotswolds and the accommodation of choice for most walkers is B&Bs.

Trowbridge is the county town of Wiltshire and is only 11 miles from the historic city of Bath. There are many options of accommodation when visiting Trowbridge, from bed and breakfast hotels to boutique hotels. A somewhat cheap option would be to stay at a country inn within the neighbouring village of Hilperton called Lion and Fiddle. The inn dates back to the 18th century and has its own bar and restaurant. It may be budget accommodation but the inn itself is very charming and welcoming. Trowbridge also has an array of B&Bs to stay in run by locals.

Warminster is a town and civil parish to the west of Wiltshire. Warminster is conveniently located near to Longleat, the country house of the Marquess of Bath. The estate of Longleat is home to the first ever drive-through safari park outside of Africa and has over 500 animals so is well worth a visit. Rather bizarrely, Warminster is also a well known location for having a lot of UFO sightings in the 70s and 80s!

For a romantic stay in a boutique hotel, the Bishopstrow Hotel and Spa in Warminster would be an ideal choice. Each bedroom is individually decorated and there are luxury spa facilities which includes both an indoor and outdoor swimming pool. This hotel is highly recommended as not only can you have a relaxing stay in the hotel itself, but you are also close to all the tourist attractions that Wiltshire has to offer. For those on a budget, there is a Travelodge just off the A36 in Warminster. There are also many B&Bs to choose from in Warminster and the surrounding area.

To the North of Warminster is the large town of Chippenham. Chippenham is a very convenient location for those visiting the Cotswolds as it is just 4 miles to the west of it. Chippenham also has some notoriety as being the location of the accident that killed American rock and roll singer Eddie Cochran in 1960, and the town holds a festival each year to remember him.

Lucknam Park, Chippenham is a boutique hotel in a very idyllic, romantic setting as it is located in the Cotswolds itself and surrounded by 500 acres of gardens and parkland. There is a wide range of activities for guests to choose from on the site itself including horse riding, clay-pigeon shooting, tennis, archery and cycling, so it would be a very good location for a stag / hen do. There is also a spa and a Michelin starred restaurant ‘The Brasserie’. For a much cheaper option, there are many quaint B&Bs and guesthouses dotted around the town.

Salisbury is a large city with cathedral to the south of Wiltshire. The cathedral is famous for its 123m spire which can be seen all over the town, and the clock in the cathedral is the oldest to still fully function of its kind.

Stonehenge is only 8 miles to the northwest of Salisbury making this the perfect place to stay if looking to get there early and beat the crowds. There are many places to stay in Salisbury if you are looking for somewhere cheap, even the Wetherspoons pub in the town centre has rooms. Like many of the villages and towns in Wiltshire there is a huge choice of bed and breakfast hotels dotted around Salisbury. 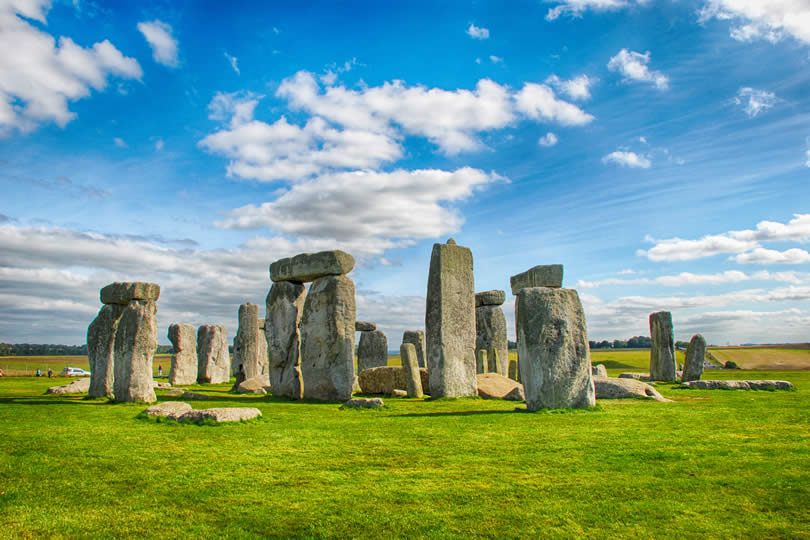 How to Visit Stonehenge from London ? 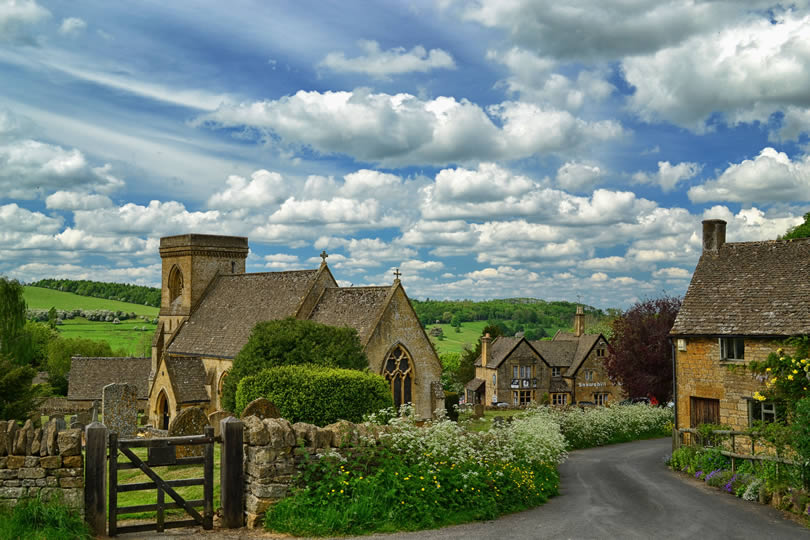 Most interesting points of interest to visit in Britain