This 4-star hotel is in Southwold town centre, 200 metres from the beach. It offers free parking, two restaurants, a butler service and free WiFi throughout. The Swan Hotel compliments many of it's original 18th... read more

The Black Lion is a 15th century inn overlooking the green with an award-winning restaurant and views of Melford Hall. Rooms are furnished with antiques and modern artifacts from around the world. Most rooms overlook... read more

This beautiful country pub occupies a privileged location close to the main cities of Cambridge, Newmarket, Bury St. Edmunds and Sudbury. Set in the picturesque Suffolk countryside, you can explore the surroundings during the day... read more

Set in an 18th-century, grade II listed building, the Satis House Hotel has 3 acres of parklands and is located just off the A12. Free Wi-Fi and free on-site parking are available. Local, seasonal produce... read more

Rich in original character and historic charm, this 500-year-old boutique-style coaching inn offering a cosy pub with real ales, wines and an open log fire is situated on the edge of the Thetford Forest. It... read more

Enjoy a tranquil Broadside setting and beautiful country gardens at this hotel hidden away at the end of a leafy driveway. The hotel’s restaurant is located within an attractive 18th century thatched barn overlooking the... read more

Situated in a small town, this inn provides real ale, good home-cooked food from local suppliers, a fine wine menu and live entertainment on a regular basis. The George & Dragon has a selection of... read more

Showcasing views of the garden, Hill Lodge is located in Sudbury in the region of Suffolk, just 36 miles from Cambridge. Free Wi-Fi is provided. Some accommodations have a seating area for your convenience and... read more

Situated amongst green gardens and fine trees, Seckford Hall Hotel & Restaurant offers pet-friendly accommodation in the heart of Woodbridge. Guests can enjoy the on-site bar and free WiFi throughout. All rooms are fitted with... read more

This small family-owned and run country hotel in North Suffolk was once a rural public house; today, it has been sympathetically renovated and still retains its historic charm and character. Carefully refurbished and sensitively restored,... read more

Boasting wonderful views across the Stour and Box river valleys, this privately owned inn is set on a hill in the picturesque village of Stoke-by-Nayland, on the Essex and Suffolk border. With a passion for... read more

Set just over a mile from Ipswich’s town centre, Toothbrush Rooms at Lattice Lodge - Self Catering offers free parking and free super-fast Wi-Fi. All rooms include an en-suite shower room and radio alarm, and... read more

Located on the unspoilt Suffolk coast, the Wentworth Hotel is just 20 metres from the beach, and offers free Wi-Fi, private parking and an award-winning restaurant. The family-run Wentworth Hotel features bright, traditional rooms with... read more

Grove House Hotel is a small, friendly and family-run, situated on the outskirts of the beautiful market town of Woodbridge, Suffolk. Grove House has en suite bedrooms, a bar and restaurant, and plenty of free... read more

This small, friendly hotel is in rural Leiston, close to the coast at Aldburgh and Sizewell. The rooms are en suite and main bar shows satellite channels. Every room at The White Horse has tea/coffee... read more

Ship Stores is a lovely B&B offering free Wi-Fi throughout, a friendly welcome, and a tasty full breakfast selection included in your room rate. Within a short walk are pubs and restaurants, a country park... read more

Good-value en suite rooms and tasty food are available at The White Horse. The hotel dates back to the 17th century and is located on the A140 near Eye. The delightful inn has comfortable motel-style... read more

On top of Kirkley Cliff, overlooking Lowestoft’s beach, Hotel Victoria is less than a mile south of the town centre. Built in 1897, the hotel has a Victorian exterior and a bright, modern decor inside.... read more

Close to the town centre and 0.2 miles from Felixstowe Railway Station, this Victorian hotel offers free parking for guests. The property was initially built for Lord Tollemarch. Today, the spacious public areas are wood-panelled.... read more

The Bull Inn is a 16th century coaching inn ideally located in the centre of charming Woodbridge. The property overlooks Market Hill including the imposing Shire Hall and the impressive St Mary’s Church. The current... read more

This modern Golf & Spa Resort is set in 120 acres of parkland, located just off the A12 road, at the gateway to Suffolk’s Heritage Coastline and only 10 miles from Ipswich. Ufford Park Woodbridge... read more

Built in 1452, the award-winning Angel Hotel is on one of the prettiest squares in the country, opposite the Abbey Gardens. Angel Hotel offers traditional Georgian elegance and charm, mixed with modern design. In the... read more

Suffolk is a large county in East Anglia, in the East of England. It borders Norfolk to the North, the North Sea to the East, Cambridgeshire to the West and Essex to the South.

Accommodation in Suffolk: from Boutique Spa and Romantic to Cheap Hostels

The best way to look at this large beautiful county and its small towns is to divide it into areas and look at what accommodation each area offers.

Lowestoft is a popular seaside resort with beautiful beaches and cliffs and a powerful sea. Accommodation in Lowestoft and the area won’t be cheap in summer, but there will be gems of budget bed and breakfast places hidden out in the country of North Suffolk and within reach of Lowestoft. A popular choice is to rent a holiday home on the cliffs near Lowestoft. Some holiday home resorts such as Kessingland, have their own swimming pools and spa bath.

There are many cottages, houses and apartments to let near the beach, but not all of those are cheap, some are quite upmarket and luxury 4 and 5 star properties.

There is something for everyone in North Suffolk, from budget b&B to luxury hotels with swimming pools and spa facilities, and plenty to explore, forest, cliff and sea. If you are looking for a quiet, out of the way holiday. this is the place for you.

Down in the Southeast corner of Suffolk is Felixtowe, a major shipping port, commercial and domestic, with ferries to Europe departing day and night. Best known for its ferry port, it also has a historic fort and some interesting architecture.

With many passengers and freight drivers arriving and departing at the port, it isn’t surprising that accommodation is in demand at all times of year and prices can be higher than average. Felixtowe has hotels such as Premier Inn, Holiday Inn and Best Western, as well as B&B options.

For cheaper B&B accomodation, try outside of town in the countryside. There are also a few luxury hotels such as Seckford Hall, a Beautiful and romantic country hotel which is often used for weddings, anniversaries and other celebration stays.

The county town of Suffolk, the small market town of Ipswich is set on the river Orwell and is a former docking and shipping town. It has a university campus and a pleasant refurbished waterfront as part of a smart and thriving little town.

The town has numerous hotel chains such as Premier Inn, Novotel, Travelodge and Holiday Inn, and also independent and Boutique hotels, as well as numerous B&B sites in and around the town. For seekers of luxury, Retreat East has rooms from over £500 per night all inclusive. You may want a room overlooking the waterfront or a cheap bed and breakfast outside of town. Ipswich has something for everyone.

A small historic town with notable history and architecture, Bury St. Edmunds is slightly higher than the other towns in the flat county of Suffolk as it is set in a group of small hills.

The town has a series of tunnels, no longer open to the public due to subsidence and collapse. But there is still plenty to see, the Cathedral, other architecture, and the first internally illuminated street sign in Britain, created in 1935. There is also a restored and fully functioning historic theatre.

Accommodation in and around the town and outside include many bed and breakfast establishments, a number of independent, spa and boutique hotels, as well as Travelodge and Premier Inn. The bed and breakfasts in the countryside near the town are exceptionally good quality and set in beautiful scenery, perfect for a romantic weekend break.

Enjoy your stay in Suffolk! 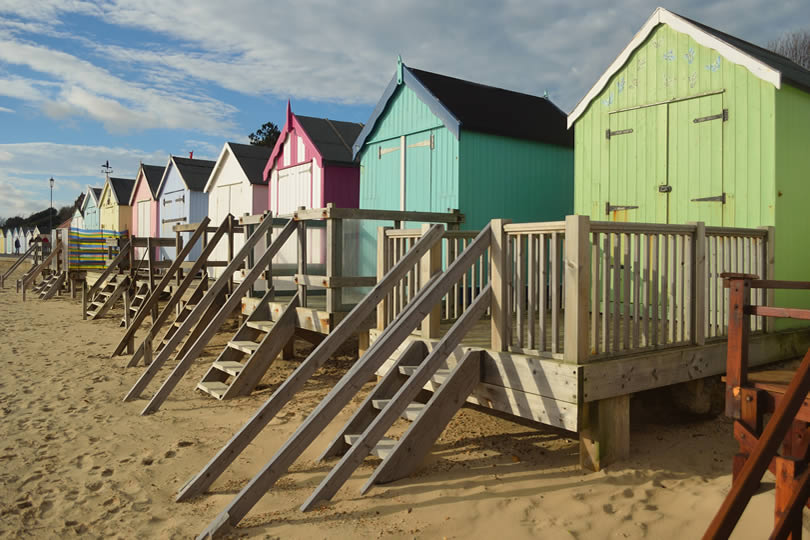